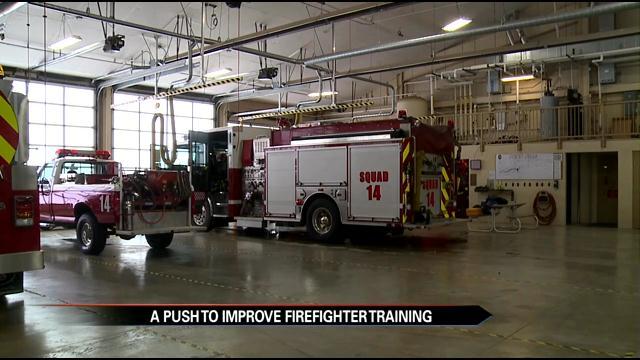 A new would create a statewide training school for fire departments and many Michiana firefighters say it's long overdue.

After serving 26 years as a firefighter, Representative Randall Frye authored a bill he says would give the state what it needs to push its fire departments forward.

“Indiana is one of the few states in the nation that does not have a central state fire academy so this would bring us in line with everyone else,” said Kazmierzak .

The Penn Township Fire Department is one of many calling for a change in the state's fire training system.

A new bill would create a central school that would mirror training programs in other departments.

“Police have had a state police academy since the 70's so it brings us in parity with the police to where we have somewhere to send our firefighters for specialty training,” said Kazmierzak .

Catching up to the police academy's standards would bring major changes to smaller stations like Penn Township.

A standardized curriculum and instruction would be first on the list.

It would also allow volunteer firefighters, to train with equipment not normally accessible to them.

But Kazmierzak wants to keep a local training component to the new program.

“I still think we need district level training," he said. "The local level training is what most people would be able to use so hopefully that wouldn't change and under current plans it's not supposed to change.”

While the program would use the same tax system for funding the current districts use, Frye does see a need to increase funds as the program grows.

“At this point we think we have enough money to establish a curriculum, training and testing," said Representative Frye. "However at some point there will need to be additional resources as the central campus develops and other expenses occur when hire instructors and so on.”

To the Penn Township station, finally getting specialized training that will push the department forward is more than worth it.

The House will have to vote to accept amendments to the bill from the Senate before it can reach Governor Mike Pence's desk.