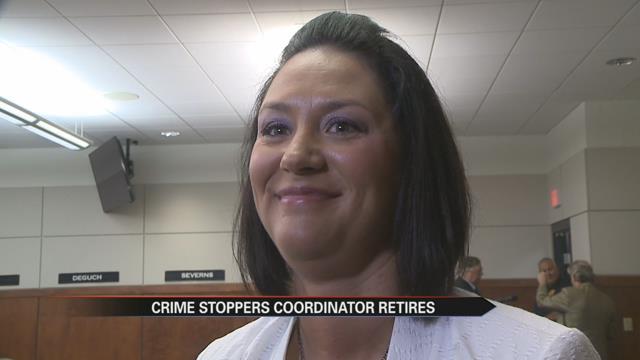 On Wednesday, Lieutenant Cindy Kilgore stepped down after eight years as the coordinator of Michiana Crime Stoppers. Officer Kayla Miller will be taking over.

Lieutenant Kilgore has been with the South Bend Police Department for 30 years.

She received a key to the city and a standing ovation Wednesday.

"This has been a fantastic career," said Kilgore.

Kilgore is retiring after 8 years as the coordinator for Crime Stoppers and over 30 years on the force.

"One day her position came open and I said you know what, this is something I'd love to do," said Miller.

Miller is a South Bend Police officer with years of experience in several Indiana counties.

"Now that I've worked with her for several weeks, I know that she will be fantastic," said Kilgore.

"Really proud of Lt. Miller who is stepping up now and I think she's also going to do a terrific job," said South Bend Mayor Pete Buttigieg.

Although they're going to miss Kilgore, she's leaving her position to a new leader with familiar sentiments.

"Probably the most rewarding is dealing with the victims' families," said Kilgore.

"We've got some great ides going forward as far as fundraising and community awareness and making sure people are aware of what Crime Stoppers is," said Miller.