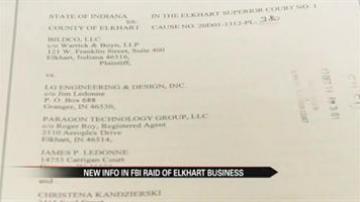 ELKHART COUNTY, Ind. -- ABC57 uncovered new information about Paragon Technology Group. The FBI seized around 100 boxes from the business last week, but the FBI has not released any information about their investigation.

According to a lawsuit filed in Elkhart County, James P. Ledonne is the Chief Financial Officer of Paragon Technology. His name is linked to at least three other companies accused of swindling money from other businesses for several years.

On December 11, 2013- a company called Bildco filed suit against James Ledonne, who also goes by Jim, stating Ledonne failed to pay rent to Bildco for the building that housed his company LG Engineering and Design on Aeroplex Drive in Elkhart since August of 2013.

Paragon Technology was also formerly located at the same location on Aeroplex Drive according to court documents.

In the suit, Bildco claims LG Engineering and Design owes more than $20,000 in past due rent, prorated property taxes and bounced check fees.

Dreama Jensen is the area director of the Better Business Bureau. She says local businesses should be cautious of companies like LG and Paragon, companies accused of failing to pay bills.

"The first clue is and it's an old saying that we've had for years, if it sounds too good it probably is," said Jensen.

This lawsuit is one of many filed against Ledonne's companies, which have also gone by L6 Systems and L and H Engineering and Design.

Anonymous comments on line-man.com accuse LG Engineering and Design-which claimed to build fiber optics splicing equipment-of taking half of a down payment up front but never delivering on the product or issuing a refund.

"You don't see a lot of that in a smaller area, it's going to be in bigger cities and so they're pretty gutsy when they'll do it in areas our size," said Jensen.

Another person on the site claims LG ripped off his company for more than $100,000.

Jensen says if a company stalls on delivering a product for too long-don't be afraid to bail out of the deal.

"If it goes too long then just stop. Don't be chasing bad money with good money. And then go to your attorney and see what you can do," said Jensen.

According to court documents-Ledonne has until May 15 to reply to this complaint from Bildco in court.