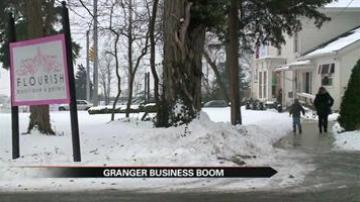 GRANGER, Ind. -- A brand new development- with restaurants, shops and apartments is coming to Granger- and it's going to be one and half times the size of Heritage Square.

Flourish Boutique has been at the historic house on Cleveland and Gumwood Road for five years- but now the house and the 46 acres behind it are under new ownership with a big development in the works.

And the owner of this local boutique said she doesn’t mind a bit. That is because business is booming at Flourish Boutique in Granger.

So when owner Vanessa Cooreman Smith got the call that the popular corner their historic building sits on was sold to Great Lakes Capital, she said it was the sign they needed to relocate.

“It was our option to stay with the house because the house is historic and it can’t be torn down but we’ve actually kind of outgrown it and felt like it was time to make a move,” she said.

Managing director from Great Lakes Capital said they’ve purchased the plot and 46 acres of land across the street from Heritage Square.

The plans include a 200-unit apartment complex, new stores, restaurants, an assisting living center, medical office, and other office spaces.

It will drastically change this part of Granger.

So where does that leave Flourish Boutique? They’re headed just down the street to fill an empty storefront at Centennial Place.

“It will be pretty much double the space. So we will be going to a 3600 square feet store. So it will be great,” Smith said.

She said it will be hard to leave the house behind but is excited for the future development and what it will bring to her boutique.

“I think that businesses thrive based off of other businesses.”

Dee Florea, who owns GiGi's Cupcakes is excited Flourish is moving in next door.

“We were crossing our fingers, hoping they would come in next door. We heard rumblings of it. And we were really excited, hoping. We welcome them with open arms. We’re really looking forward to them being here,” said Florea.

Flourish hopes to be moved into their new space by February or March.

Developers hope to break ground on the new development this summer.