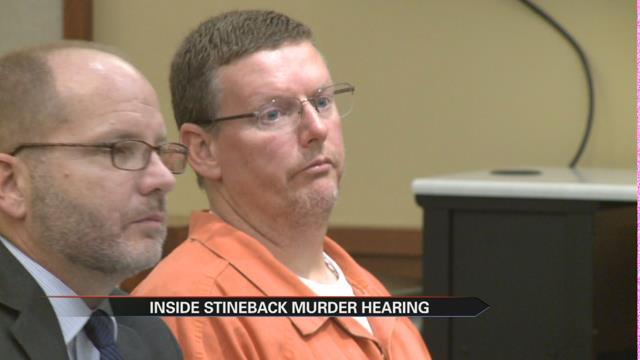 The man accused of killing his wife in their home on Flanders Street in Wayne Township, Michigan on May 12 was in court Wednesday.

Terry Stineback is accused of murdering his wife while a 9-year-old girl was in their home .

The focal point of the hearing was a revealing 9-1-1 call played in the courtroom.

The recording includes audio of Stineback saying that he shot his wife, Laura.

In the call, the operator said, “What happened to your wife?”

Terry responded, “She got shot.

After a long pause, the operator said, “Did you shoot her?”

The court will decide if what was said on this tape can be used against Stineback.

Stineback is charged with one count of assault with attempt to murder, a felony firearm charge and an open murder charge, in which the jury decides between manslaughter, first, or second degree murder.

“There was a very large amount of blood,” Paul McGowen, a deputy sheriff testified.

A gruesome scene was described by first responders as each took the stand.

They believe Stineback was in his home with his wife, Laura, and a 9-year-old female family member.

State Trooper Benjamin Mahaffie spoke with the child after the incident occurred.

“She had gone to bed early in the evening and woke up to her mom screaming for help,” Mahaffie said.

According to what the young girl told police, Terry Stineback began to choke his wife in the basement during an argument.

They then moved into their bedroom.

“She told me three loud bangs within the room and everything got silent at that point,  Mahaffie said.

Stineback then called 9-1-1, where he spoke with an operator until police arrived.

“Clearly we'll be presenting all the evidence that we think will be relevant to advance justice in this case,” Cass County Prosecutor Victor Fitz said.

The child did not appear in court Wednesday.

She was not physically harmed during the shooting.
Share this article: