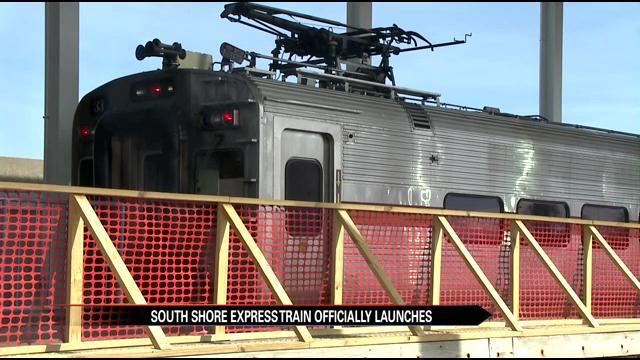 Getting to and from Chicago just got a little faster. At 6 a.m. Monday, the first South Shore Sunrise Express train left the South Bend International Airport headed to the windy city.

Quick and convenient is what the South Shore Sunrise Express strives to be.

Currently a train ride from South Bend to Chicago will take as long as two and a half hours.

“Our desire was to see it be quicker,” Rea said.

So after years in the making, a new express train has arrived.

One will leave South Bend at 6 a.m., the other will leave Chicago just before 4 p.m.

Both will get travelers to their destination in under two hours.

Rea says it's an improvement, but not the final goal.

“It's the first step in what I think is a longer term goal related to the South Shore. And that is to get it down to about 90 minutes. So if its get to 90 minutes it just becomes a much more viable business option and a better commuting option,” Rea explained.

The express train is currently in its test phase.

If successful, Michiana may see more express trains offered throughout the day.

“Ridership would dictate more so my hope is that people embrace it and ride it regularly,” said Rea.

But if ticket sales are low, the opposite can happen. The express train could be canceled all together.

Rea said it is bigger than getting people to and from Chicago.

He said this train is an example of yet another quick connection to a big city, setting South Bend apart from other Indiana cities.

Click here for more information on the Sunrise Express