New governor on duty in Indiana 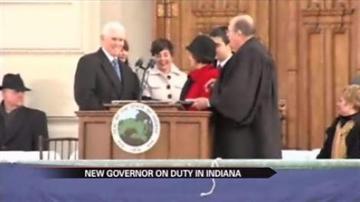 INDIANAPOLIS -- Indiana's 50th governor is officially at work and on the job. Mike Pence took his oath of office Monday in Indianapolis.

The Republican took the reigns from former Governor Mitch Daniels.

Pence beat out his Democratic challenger John Gregg on the platform of creating more jobs and boosting Indiana's economy.

Pence says he is ready to get to work.

"For the 50th time in our state's storied history a new administration has peacefully taken office as a living testament to the strength of our constitution and the character of our people," said Governor Pence.