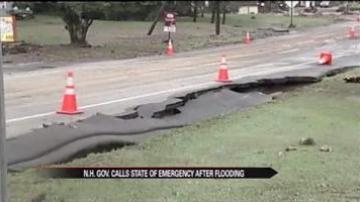 NEW HAMPSHIRE — Extreme flooding in New Hampshire has forced the state's governor to declare a state of emergency.

Nearly four inches of rain hammered the state in less than 24 hours, washing away roads and swamping neighborhoods.

The continuous storms are buckling roads, trapping many people living in the area.

Officials say  the biggest problems are caused by the flash flooding.

This is the second time this has happened. In a little more than a year and residents say they have had enough.

Forecasters say all this rain along the East coast could let towards the end of the week.