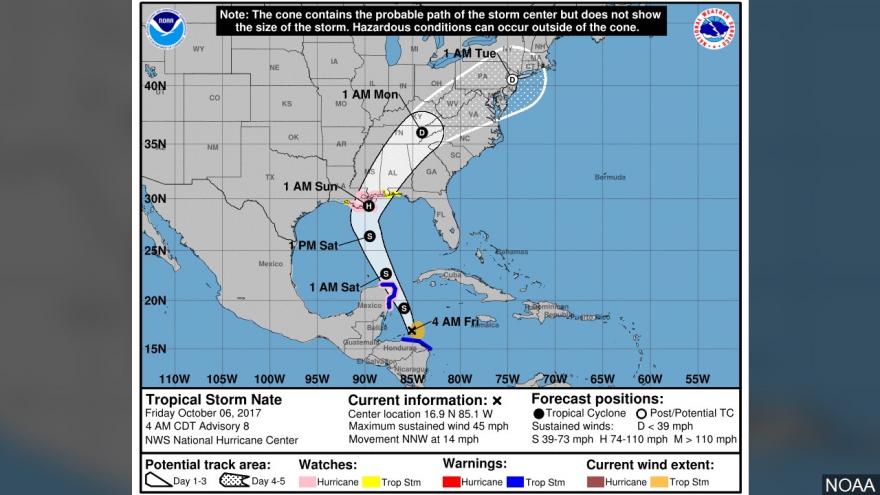 (CNN) -- New Orleans, and states from Louisiana to Florida, braced Friday as forecasters predicted Tropical Storm Nate would pound the Gulf Coast this weekend as a hurricane.

According to the National Hurricane Center, the eye of the storm was expected to pass late Saturday or early Sunday about 50 miles east of New Orleans, which was devastated 12 years ago by Hurricane Katrina. It would be the third hurricane, after Harvey and Irma, to hit the US mainland in six weeks.

A storm surge warning was put in place from Morgan City to the Alabama-Florida line, as well as along the northern and western shores of Lake Pontchartrain.

"Residents in these areas should heed any evacuation instructions given by local officials," the hurricane center said.

Nate killed at least 21 people as it passed Thursday over Costa Rica, Nicaragua and Honduras, where it caused widespread flash flooding and mudslides, officials said.

Over the warm waters of the northwestern Caribbean Sea, Nate was forecast to gain strength as it approaches the Yucatan Peninsula in Mexico later Friday and possibly strengthen into a Category 1 hurricane by the time it makes landfall along the Gulf Coast, the hurricane center said. It is forecast to bring "direct impacts from winds, storm surge and heavy rainfall," the center said.

In the latest hurricane center advisory, at 2 p.m. ET, the center of the storm was "moving quickly toward the northeastern tip of the Yucatan Peninsula and the Yucatan Channel."

Nate packed maximum sustained winds of 50 mph Friday afternoon and was moving north-northwest at 21 mph, the hurricane center said. It was about 125 miles east-southeast of Cozumel, a Mexican island near the Yucatan Peninsula.

New Orleans Mayor Mitch Landrieu declared a state of emergency Thursday and advised residents to stay put over the weekend.

"There is no need to panic. Be ready and prepare. Get a plan. Prepare to protect your personal property," Landrieu tweeted.

Gov. John Bel Edwards declared a state of emergency for all of Louisiana. The storm will "make landfall in the close vicinity of New Orleans," the proclamation noted, adding that six parishes have declared emergencies and others would do so soon.

New Orleans, much of which lies below sea level, was gearing up for a hit, and Landrieu urged people who live "outside the city's levee protection system or in low-lying area" to seek higher ground.

Residents have been wary since the city's unique drainage system experienced critical deficiencies during heavy summer rainstorms, leading to the flooding of several hundred properties.

"Residents who live inside the levee system should prepare to take shelter with essential supplies including food, water, and medications," the mayor said Thursday.

Edwards authorized 1,300 National Guard troops to mobilize ahead of the storm, with some headed to New Orleans to help monitor the pumps, he said.

Storm due to move through quickly

Nate would be the first hurricane to hit Louisiana since Hurricane Isaac in 2012 as a Category 1 storm.

"It will still be fairly strong when it makes landfall, but it will be a quicker moving storm than the last few we have had," CNN meteorologist Haley Brink said. "It's supposed to be in and out pretty quickly."

The storm could drop 3 to 6 inches of rain, with 12 inches possible in some areas, from the central Gulf Coast north through Tennessee and the southern Appalachians through the weekend, possibly spawning flash floods, the hurricane center said.

The last hurricane to hit the Louisiana-Mississippi-Alabama region in October was Hurricane Lili in 2002. The last time three hurricanes hit the mainland in the same year was 2008, when Dolly, Gustav and Ike came through.

Though Florida remained largely out of the forecast cone, hurricane, tropical storm and storm surge watches were issued late Friday from the state's border with Alabama east as far as Indian Pass, the hurricane center said.

With parts of Florida still reeling from Hurricane Irma, Gov. Rick Scott declared a state of emergency for 29 counties and encouraged residents to get prepared in case Nate's forecast track changes. Evacuations could be called, he added.

"Just think about your family: Get your three days of water, three days of food; if you're taking medicine, make sure you have your medicine," Scott said Thursday in a news conference.

In Alabama, a statewide emergency declaration signed by Gov. Kay Ivey went into effect Friday morning. The move "frees up personnel and resources in case there is a need to respond to any storm related activity."

"We encourage citizens in low-lying areas to pay special attention to newscasts," he said at a news conference. "There is a projected 4- to 7-(foot) storm surge. It will happen to coincide with high tide, which will give you additional water levels."

"Don't wait 'til Saturday after dark to decide what you have to do in case things with the storm change," he said.

Of the 21 dead in Nate's passage through Central America, 11 died in Nicaragua, eight in Costa Rica and two in Honduras, officials said. Several people also were reported missing after the storm hit.

Hundreds were rescued from floodwaters, and many lost power and running water in Nicaragua, Honduras and Costa Rica, officials said.

The main threat for Central America was heavy rainfall, which triggered life-threatening flash flooding and mudslides.

Costa Rica President Luis Guillermo Solis declared a national state of emergency to assist those affected by the storm.

This story has been updated to reflect the latest death toll from authorities.