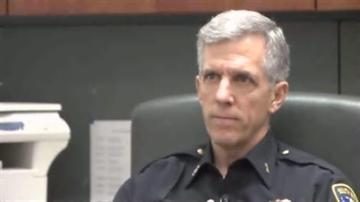 SOUTH BEND, Ind. — South Bend's new police chief has a lot on his hands. There is the police tape scandal, a high homicide rate and a spike in youth violence.

But Ron Teachman said his main focus is on moving forward.

Teachman is calling on the entire community to make the city a better place to live.

"I will do my best—day and night—to become acquainted with how the department is operating now," Teachman said.

It is not easy being on any new job. And for Teachman, he comes to the South Bend Police Department amid scandal.

His focus is to turn things around. And he said that starts right now.

Teachman said that those numbers will only change if everyone is involved in moving forward.

"The community that is the safest is the one that polices itself, whether it's in the family, the neighborhoods in the community of interest, that we're here to assist as professionals," he said.

The chief said it starts with open communication.

And that those in trouble areas need to speak up and speak out.

"I'm here for the long term—I'll be open and available—if your listeners have a comment or concern they can reach me directly," Teachman said.