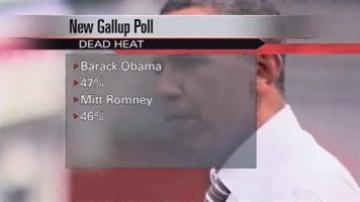 Labor Day launches the home stretch of the presidential race.

After last week's Republican convention, Mitt Romney has been to the battleground states of Florida, Ohio and New Hampshire over the weekend, while president Obama made pit stops in Iowa, Colorado and in Ohio.

Those battleground states are big ones for him as well.

A new Gallup poll shows a dead heat with Obama at 47 percent and Romney 46 percent. Another poll shows that after 2-point Romney lead following the convention, the president and Romney are now tied with 45 percent each.

This shows just how close this race is and both are on the attack. The president claims Romney’s agenda is outdated and Romney calling him out on broken promises.

While Democrats meet in Charlotte this week, Mitt Romney will be spending some of his time in debate practice.