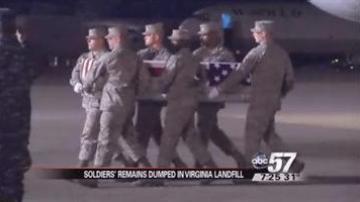 VIRGINIA -- Shocking news has been released about the remains of U.S. soldiers killed overseas.

A new report shows hundreds were dumped in a landfill. The Washington Post says new records show the Air Force dumped remains of at least 274 soldiers in a Virginia landfill between 2004 and 2008. That's higher than initially reported.