New rule this season includes ejecting players who "target" others 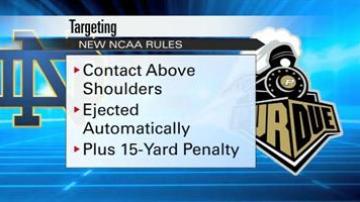 SOUTH BEND, Ind.  --- There are new rules every college football season but the one that has everyone talking is targeting.

Starting this year, players who "target" and make contact with defenseless players above the shoulders will be ejected.

This was added to the already existing 15 yard penalty.

Seven players were ejected from games in week one of college football.

Notre Dame Coach Brian Kelly says he was surprised.  But stressed why it's important to make the distinction.

"We are still steadfast in our belief that our guys know the difference between intent in injure and tackling and being aggressive football players," said Head Coach Brian Kelly.

The "Football Rules Committee" passed the new rule in February.

Then approved it in March.