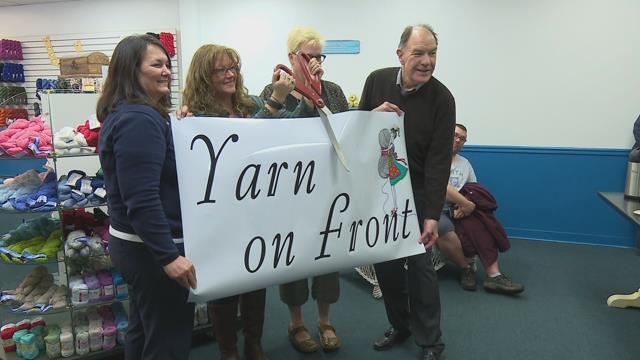 The opening of a new yarn store in Dowagiac is the latest small business helping the city’s downtown boom.

“I still feel like I’m in a dream,” June Phillips-Nemeth, owner of ‘Yarn on Front,’ said.

Her dream was made a reality Tuesday afternoon when her new business’s ribbon cutting officially took place.

“After my favorite local yarn shop closed a couple years ago, I decided that maybe I could take my passion into a career,” Phillips-Nemeth said.

She is a self-described knitting and crocheting addict who has transformed her hobby into downtown Dowagiac’s newest small business.

“I spend a lot of my money [in Dowagiac], so I’m very passionate about keeping it local,” Phillips-Nemeth said.

She shares her passion with longtime Dowagiac Mayor Donald Lyons.

“The downtown is the heart and soul of your community,” Mayor Lyons said. “If you judge a community, you’re going to judge it based upon its downtown.”

So Dowagiac’s downtown has been Mayor Lyons’ priority in his 19 years in office.

He’s been a small business owner for nearly 50 years, so he understands what it takes to make business in his town succeed.

And with the help of the dozens of local entrepreneurs who line South Front Street, downtown Dowagiac has become a role model for nearby communities.

“We have had other communities come to Dowagiac to say, ‘How did you do it?’” Mayor Lyons said. “Probably the most obvious community was Goshen.”

If a state highway runs through your downtown, fight the state to remove it. Dowagiac business owners did just that 30 years ago.

Have a city employee whose job description is to keep every storefront full.

Have the political will and skill to pull it all off.

You can find Phillips-Nemeth and her daughter, Andrea, at ‘Yarn on Front’ Mondays through Saturdays, and on Facebook.

Phillips-Nemeth said she is thrilled because her daughter has special needs, but she now has a job working alongside her mom.

The city just completed a $1.6 million project to redevelop the entrance ways to downtown Dowagiac to make things even more appealing.

That ribbon cutting is Thursday.