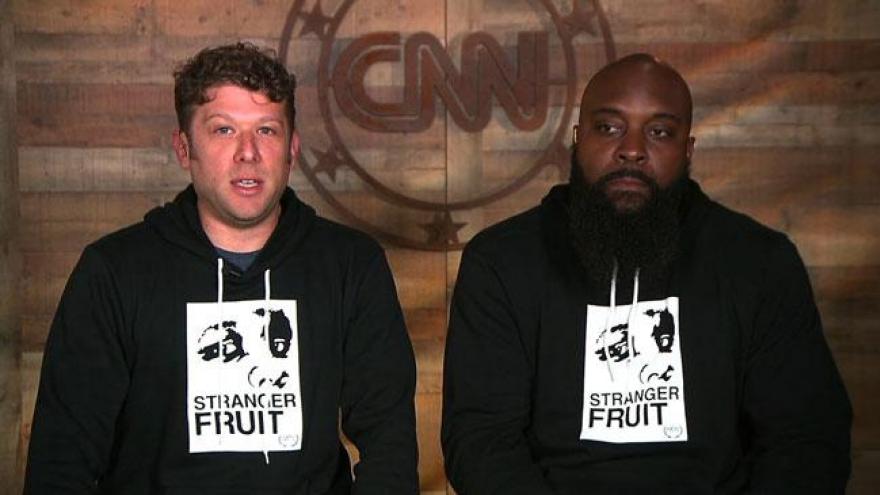 (CNN) -- New video captured hours before Michael Brown was killed shows the 18-year-old exchanging marijuana for cigarillos with the clerks of a Ferguson, Missouri, store, a documentary director told CNN on Monday.

Director Jason Pollock, whose film "Stranger Fruit" debuted at the South by Southwest festival in Austin over the weekend, said the video shows that Brown did not rob the store before being stopped by police and that surveillance footage purporting to show Brown engaged in a robbery at Ferguson Market and Liquor was actually video of Brown returning to the store to retrieve the cigarillos the clerks gave him.

"This is a shady store. We've asked a lot of people in this community. You can buy weed at the store," Pollock said.

Pollock suggests that had this footage been released, it would've altered the narrative that Brown was shot after robbing the store. He learned of the footage from a St. Louis County police report that mentioned a video from 1:13 a.m. the day of Brown's death, he said.

An attorney for the store and its employees is accusing Pollock of editing the video. CNN cannot independently confirm the video's authenticity.

About 100 protesters gathered at the store Sunday night, forcing it to close, and gunshots were heard before midnight, but none of the protesters appeared injured, the St. Louis Post-Dispatch reported. A Ferguson policeman suffered a broken nose when a woman punched him in the face during an arrest, the paper reported.

Dad: Brown 'not in the wrong'

Appearing with Brown's father during an earlier interview, Pollock said, "What this video shows is that (police) lied to the world about what happened. They wanted to make Mike look bad, so they put out half a video to destroy his character in his death."

Brown's father said the new video shows his son "was not in the wrong," and he'd like to see the case reopened. He feels protests might not have turned into violent riots had the police been more forthcoming in the first place, he said.

"Maybe the city of Ferguson wouldn't have gotten tore up like that," Michael Brown Sr. said. "It's almost like they asked for it, if you ask me, for not keeping no truth in there."

Police say the new footage is irrelevant to their investigation. Investigators have previously said Officer Darren Wilson initially stopped Brown for walking in the street, not because the store reported a robbery.

The new surveillance footage, captured about 11 hours before Officer Darren Wilson fatally gunned down Brown in August 2014, shows Brown place a small bag on the counter. Two of the clerks pick it up and appear to sniff it.

The clerks then give Brown a bag with cigarillos, which he takes, but he then turns around and gives it back to them before leaving. According to Pollock, it was common for residents to barter with the clerks, and the younger clerks did not want an older clerk to know what they were up to.

So, in the widely publicized video released after Brown's death, Brown was not stealing cigarillos, but rather, retrieving them after he'd left them in the store earlier, the filmmaker said. According to Pollock, the clerk who Brown pushes in that video is the older clerk, who was not aware the other clerks had given Brown the cigarillos as part of the barter exchange.

'My clients did nothing wrong'

Attorney Jay Kanzler, who represents the store and employees, told CNN that the version of events in the documentary is false and that it has been edited to omit a clerk throwing a bag back to Brown.

"My clients did nothing wrong," Kanzler said. "They love the people of Ferguson and truly want to get on with their lives."

Kanzler was present at the market during the protests Sunday night. Video from the scene shows him speaking to people as protesters shout at him.

He said that the full surveillance video will be released Monday.

Pollock, a former creative director for documentarian Michael Moore, stood by his own two-year investigation, saying, "We show the entire exchange. We show the exchange from behind the counter. ... Anybody that sees it sees what happens."

He called the new footage and the convenience store as a whole "a distraction" and said he publicized the footage to draw attention to the segment of his film dealing with the physical evidence at the shooting scene "that they don't want us talking about."

Pollock cites what he says is proof that Brown was shot in the top of his head, that a bullet came out of the teen's eye and that a bullet was found in the ground by his head, all of which the filmmaker says helps show "that Darren Wilson murdered Mike and he should be in jail for that."

A review of his film by the Hollywood Reporter devotes only a sentence to other elements of the film, calling the new footage "the big reveal."

The film's title refers to the poem-cum-Billie Holiday song protesting the lynchings of African-Americans across the South. One verse of the poem describes "black bodies swinging in the Southern breeze, strange fruit hanging from the poplar trees."

Both a grand jury and the U.S. Justice Department declined to pursue charges against Wilson.

The officer, who resigned from the Ferguson Police Department after the shooting, has claimed Brown assaulted him and there was a struggle over his gun. Brown took off running, according to police, only to turn around and charge at Wilson, who opened fire, fearing for his life.

"If it did occur, the incident is still irrelevant to our investigation because our department investigated the encounter between Michael Brown and Darren Wilson," the county police said.

Then-Ferguson Police Chief Tom Jackson told the media days after Brown's death that the "robbery does not relate to the initial contact between the officer and Michael Brown." Wilson "connected" Brown to the robbery call only after pulling him over for walking in the street, the former chief said.

Kanzler claims the soon-to-be-released video will refute the filmmaker's "edited version of events."

He adds that the video is "not new" and that the full video was handed over to police, the FBI and also the Brown family "very early on."

Many were upset with the Ferguson Police Department's decision to release the original surveillance video of the altercation at the store because they felt it was aimed at justifying police use of force. Protests erupted across the country after Brown's death.