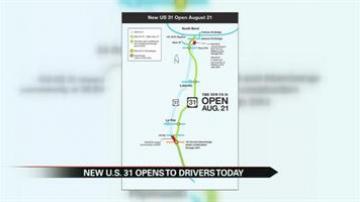 Six years ago, INDOT began construction on the new US 31.

A small section of the new highway opened Thursday to drivers from South Bend to Plymouth, but it does not come without consequence.

John Bourbonnais drives from Atlanta and uses US 31 to take his kids to school a few times a year, and he enjoys driving around little towns that slow him down.

"It passes those little towns that you have to slow down in. It's just nice to be able to pick up a little speed and be able to move around a little bit."

The feeling is not shared with locals.

Amanda Ousnamer works at a fast food restaurant in LaPaz and she said this change is going to affect all the businesses in the area, and she's worried it will hit her wallet.

"It's my livelihood, it's my friends’ livelihood that is at stake right now."

Owners of the Route 66 gas station in LaPaz have three children and share Ousnamer’s feelings, saying the change is not worth the loss.

"And they spent millions and if it impact us, that’s another revenue being lost. Not just the millions that the state of Indiana lost for 15 minutes," says Gurinder Kaur.

That's how much time drivers will save by taking the new route.

Some say that 15 minutes will cost dozens their jobs.

"Arby's employs about 20 people. There's McDonald's and Burger King that employs about the same. So that's at least 60 people losing their jobs," Kaur says.

As drivers whiz through Plymouth on the new highway, employees near the old one watch and wait for a change in business.

Business owners in LaPaz are hoping their regulars will keep them in business, as well as traffic for home Notre Dame games.
Share this article: