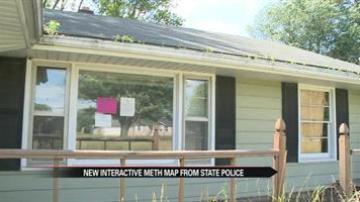 ELKHART, Ind. -- Indiana State Police have seized nearly 700 meth labs across the state already this year. Because of the dangers of living in a home that was formerly a meth lab, a new website lists all locations where a meth lab has been seized.

Meth labs can be anywhere, from warehouses to cars, but many are found inside of homes.

The website allows anyone to search any address to find out if a meth lab was ever found at that location.

Many of these homes look like your typical home. They are in nice neighborhoods and some are even near schools.

They may look like a good investment to potential homeowners who don't know it was previously used for making meth.

Houses that previously held meth labs can be dangerous.

“You’d have to assume that it could be dangerous to your health,” said Indiana State Police Trooper Gretchen Deal.

Meth is made from a combination of household products including solvents, acids and more.

“A meth house is not to be taken lightly. So police officers, when we go in the house, we always suit up. We have masks on to help prevent health issues for us,” Deal said.

Those chemicals can cling to a home’s carpet, walls and insulation. They can remain there for an undetermined amount of time.

It is a major risk to the next homeowner.

“A lot of times people report they just feel sick all the time. They’re lethargic. They get sleepy, headaches, and sometimes they don’t know why. If they’re in a house unbeknownst to them, that used to be a meth house,” Deal said.

Blue dots represent all of the meth labs seized in Indiana. You can click on them to get an exact address and even a Google image.

“When you go out to buy a car you want to know if your car’s been in a crash. So you ask them for the car facts. Cause you want to make sure that your car is safe,” Deal said.

Police said this is a new way to do a background check on your home. As of July 1st all former meth labs must be registered on this website.