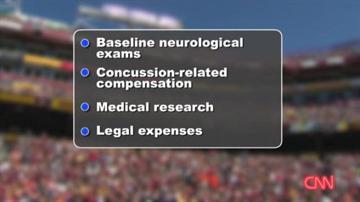 (CNN) -- A federal judge approved Monday a preliminary settlement in a class action lawsuit filed by thousands of former NFL players against the National Football League.

The settlement will provide eligible retired players with baseline neurological exams and include monetary awards for diagnoses of ALS, Parkinson's disease, Alzheimer's disease and early and moderate dementia.

There is no cap on the amount of funds available to pay these monetary awards and all valid claims will be paid in full for 65 years.

"This is an extraordinary settlement for retired NFL players and their families -- from those who suffer with neuro-cognitive illnesses today, to those who are currently healthy but fear they may develop symptoms decades into the future," said the two lead attorneys for the players, Christopher Seeger and Sol Weiss.

The settlement also makes provisions for family members of some living and deceased players.

"We are grateful to Judge (Anita) Brody for her guidance and her thoughtful analysis of the issues as reflected in the comprehensive opinion she issued today," said NFL Senior Vice President Anastasia Danias.

Initially there was a $765 million figure on the settlement with $675 million capped. The judge declined in January to approve the deal, saying she was concerned about the amount of money. But the latest agreement reached two weeks ago eliminated a maximum for the monetary award fund.

The NFL will use $75 million for medical tests to help determine if any retired players have brain damage and for treatment.

The retired players could receive between $1.5 million and $5 million depending on their age and the severity of their cognitive impairment. Players with less than five years of experience will receive smaller awards.

The league could pay up to $112.5 million in legal fees, according to the settlement.

About 5,000 former players are involved in the class action but as many as 20,000 might be eligible. Current NFL players are not included in the agreement.

A hearing to assess the fairness of the outcome of the case is scheduled for November 19. The judge will issue her final ruling after that and players can then begin to register for benefits. They will have two years to do so.