NFL players behind rant speak out 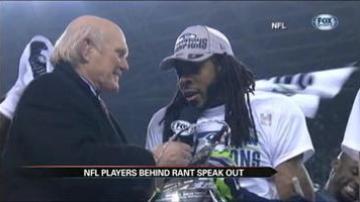 Seattle Seahawks' Richard Sherman made a name for himself after a tirade following Sunday's game against the 49ers and specifically against Michael Crabtree.

Sherman said the bad blood goes back to the off season when Crabtree tried to start a fight at a charity event but now the two players at the center of it all are speaking out.

"Obviously I could have worded things better and could obviously have had a better reaction and done things differently," said Sherman.

We could be hearing more from Sherman as his team is headed for the Super Bowl where they will play the Denver Broncos.