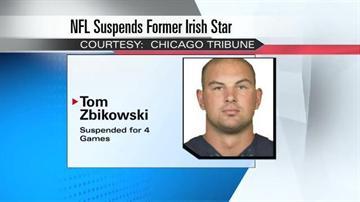 The Chicago Tribune reports he was suspended for four games.

Zbikowski was waived by the Chicago Bears shortly after the preseason ended and is now a free agent.

He was a third round draft pick by the Baltimore Ravens in 2008. He also played for the Indianapolis Colts.