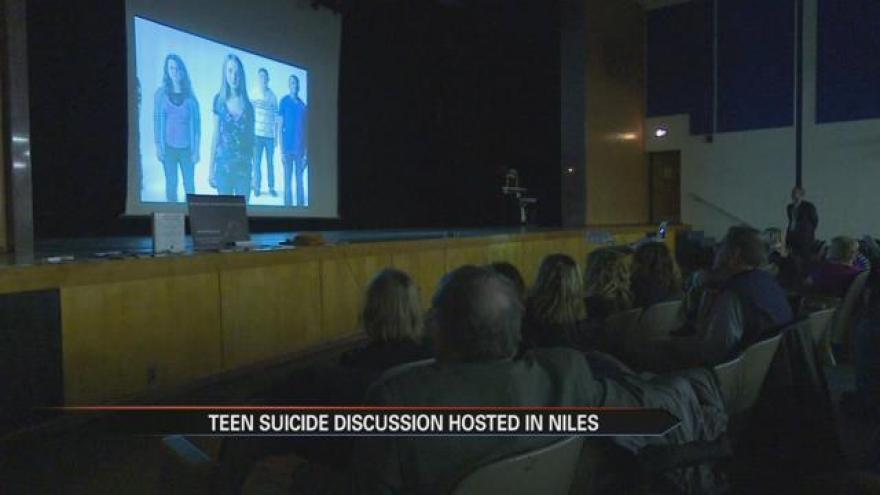 Niles community schools is stepping up to put a stop to teen suicide.

The district held a community forum at the high school on the issue just months after 16-year-old student Adam Stoops took his life.

The school also used the event to introduce parents to the support team working to help their kids.

A handful of counselors, staff and administrators were on standby to answer questions from parents.

Many of them said just talking about this can be taboo, but all agree this conversation can save lives.

“It’s never too early, and as parent you have to be involved,” said parent Tara Myer. “If you’re not going to be involved as a parent you can’t expect the teachers and the parents to take care of everything.”

It’s going to take teachers, parents and students to solve a problem that’s haunting this community.

“Last fall we’ve had a student pass away from suicide and since then we’ve been working on developing programs and preventative measures on what we need to do to prevent further teen suicides,” said Dan Applegate, Superintendent of Niles Community Schools.

Those programs were outlined Monday night, including an anonymous tip line the school adopted called OK2Say.

It’s open for students and parents in order to help prevent another tragedy from happening in this district.

“I lost my son to suicide on May 4, 2015,” said parent Kathryn Greer. “It was kind of, let’s push it under the rug and pretend like it never happened and even in this time frame we’ve learned that we can’t keep pushing it under the rug, that we have to talk to kids about and we have to let them know that we’re listening.”

Members of the district say listening and making an effort to do something about.

“Today was the first step in opening that conversation,” said Applegate.