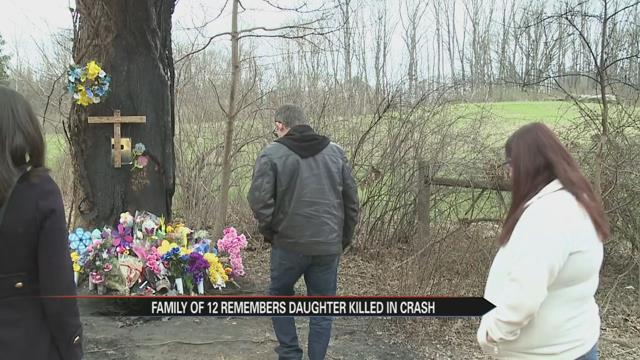 On Wednesday a Niles family, of twelve announced funeral arrangements are losing a huge part of their lives

On Friday, 19-year-old Angela Briand lost her life in a single car accident in Bertrand Township.

Christina and Rick Briand her parents say they are staying strong and keeping busy in this time of grief.

“Tell you family that you love them and kiss them and hug them because you don’t know,” says Rick.

The Briand say they saw a bright future for Angela.

She attended Lake Michigan College and made sure to let her mom, dad, and nine other siblings know how special they were to her.

“I had a text from her that morning saying good night I love you,” says Christina.

Rick says Angela was healthy and full of life.

“The last time I saw her she was running out the door laughing and smiling,” says Rick.

Rick says he would rather hold onto that memory than the site police described to him on Briar Road.

“I knew Angela never got in any type of trouble so I knew it was just really bad,” says Christina.

Michigan State Police arrived to an SUV engulfed in flames after hitting a tree.

“She was the kind of girl that drove five miles under the speed limit because she wanted to be safe and because she was new,” says Rick.

Angela had just gotten her license in October of 2015.

Michigan State Police are still investigating how the accident happened and the coroner has not yet released a cause of death.

In the meantime the Briands hold onto to memories of their daughter.

A time of visitation will be held on Sunday, April 17, 2016 from 5:00 p.m. until 8:00 p.m. at Brown Funeral Home in Niles with The Rosary at 7:30 p.m. A Mass of Catholic Burial will be held on Monday, April 18, 2016 at Brown Funeral Home in Niles beginning at 11:00 a.m. Interment will follow at St. Vincent de Paul Catholic Cemetery in Elkhart, Indiana. The family will conclude Angela’s remembrance at the Niles F.O.P. on State Street following cemetery services.

Memorial contributions may be made in Angela’s memory to www.YouCaring.com/AngelaBriand or envelopes are available at Brown Funeral Home.

Condolences, memories and photos of Angela may be shared at www.BrownFuneralHomeNiles.com.