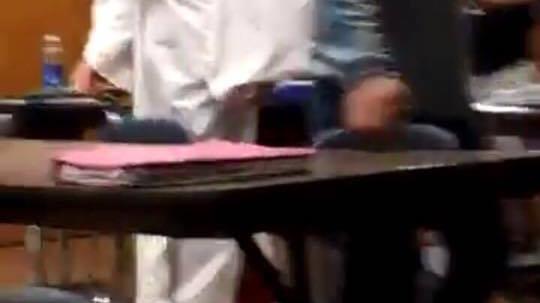 A picture taken inside a Niles High School classroom Thursday is getting a lot of attention.

In the photo originally posted on the app Snapchat, the student is dressed as a member of the KKK.

School administrators say the student dressed up as part of a presentation for history class.

"You look at all the different things that's going on around the country already with race relations, and you don't think that you'd have to be dealing with that kind of stuff here," said Pastor Bryant Bacon of Mount Calvary Baptist Church.

The picture quickly spread on Facebook, resulting in several comments condemning the presentation.

"When you see that, it kind of raises some questions about what's really going on around here," said Pastor Bacon.

Niles School officials were not available for comment, however the public relations firm representing the school issued a statement Friday afternoon saying the costume was part of an educational skit about racism for a U.S. history class.

The statement went on to say in part, "The inclusion of these props and costumes was highly inappropriate and insensitive. An investigation into the approval process for the skits and related classroom oversight is underway."

On Facebook, one person wrote, "Blacks take offense to that...there's just some things you don't do in a school, and that is one of them."

Pastor Bacon says he hopes the incident will lead to new lessons being learned.

Spring break began earlier today for Niles High School, so the building has been empty since mid-afternoon Friday.

The teacher whose class this incident happened in said he was told he could not speak on camera about the incident. Off camera, he did say he was upset the classroom project turned into something this big.