Niles River Festival may not receive funding from the city 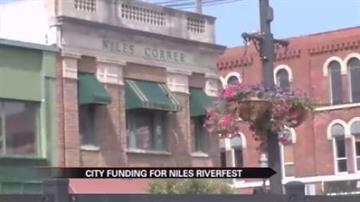 NILES, Mi. -- On July 22nd The Niles city council will vote on whether they will provide $2,500 dollars to the Niles riverfest. On Monday the council postponed the decision because of legal issues.

The coordinator of the riverfest said the money won’t make or break the event but financial support from the city of Niles would make sure it's bigger and better.

August 1-4 the streets of downtown Niles will be filled with food, motorcycles, and music.

If the festival receives extra money from the city they will be able to put more floats on the water and have a sling shot station for kids. The local boy scout troop is putting together a flotilla of river rafts.

Deb Wozniak, Coordinator for Niles River Fest said “They put together the rafts and anybody can come and float down the river and the theme this year is cartoons so if you have some real characters at work have them come and float with us!”

A final vote on the city's contribution to river fest is expected in a couple of weeks. The council meets again on July 22nd.