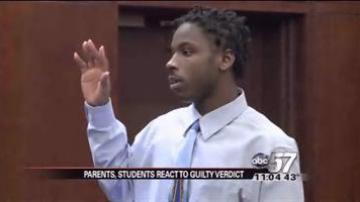 Washington sat silent as he learned his fate today in court.  A jury found him guilty of all seven charges against him.  Niles high school parent Christine Phillips says he got what he deserved.

"It was wrong.  This kid got convicted.  It was wrong", said Phillips.

But Washington's friends who played football with him have a very different opinion.

"I was shock really.  I was sad, because there are five good friends of mine and its sad to see something like that happen to those kids", said Niles High School student Austin Parks who played football with Washington.

Parks says the whole thing got blown out of proportion.

"I don't believe he understood the seriousness of what happened", said Parks.

His classmates say they think his intentions were merely teenage stupidity and that the girls played some part in the incident.  But Phillips says that does not excuse what he did.

"To put the blame on the victim which is what commonly happens in the patriarchal society we live in.  I think is just b.s.", said Phillips.

Although Phillips does believe Washington should have been prosecuted, she thinks his punishment may be harsh and says there are few other people to blame in this situation as well.