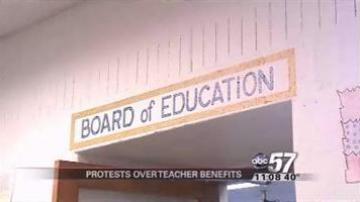 NILES, Mich. – After over a year of contract negotiations, Niles teachers are still battling the school board over salary cuts and insurance caps.  Teachers and their supporters met outside of Ballard Elementary to rally for their cause.

Michigan Education Association Director, Joe Washington, told ABC57 the teachers proposed a six percent wage decrease to the board and they still would not accept that offer.  The board proposed their best offer back in December -- an eight percent wage decrease.  But Washington says that figure is unacceptable to teachers trying to feed their families.

Teachers piled into the Niles School Board meeting Monday night to let it be known they are still fighting for the salary and benefits they believe they deserve.

“If you had to say that teachers in Niles could only work for eight hours, you would not get a lot of the things you actually get, because they do so much more without getting paid," said Michigan Education Association Director Joe Washington.

Washington says not only to Niles teachers deserve to maintain their current wage, a lot of them cannot survive on the proposed eight percent wage cut and insurance cap.

“To lose a thousand dollars a month in your income is pretty drastic.  This individual had a mortgage, a car payment, and student loans, she is going to lose her home and have to move in with her parents," said Washington.

The Niles School Board insists these cuts are necessary to avoid a future deficit, but Washington says that simply isn’t true.

“They can afford what we are asking," said Washington.

Washington says they are not asking for an increase, they just want to maintain what they already have.  And he says if that does not happen, the students will be the ones who will suffer.