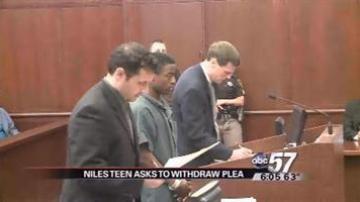 NILES, Mich. -- There are new developments for a Niles teenager who is accused of trying to blackmail a classmate into having sex!

As part of the deal, he agreed to testify against his four co-defendants.

On Monday, Murphy asked the judge to withdraw his guilty plea.

The judge has not made a decision, but he did grant Murphy’s request for a new attorney.

Prosecutors say the teens threatened to post video of a girl having sex with one of them on Facebook unless she had sex with all of them!