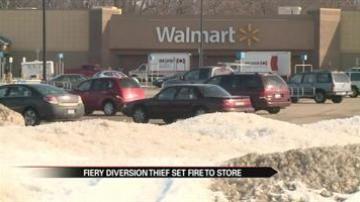 NILES, Mich.-- Police are looking for a man who started a fire in the apparel section at Walmart. The suspect broke a case, took several electronics, and fled the scene.

Walmart spokesman Randy Hargrove said no one was hurt, and no one is in custody.

The Walmart at 2107 S. 11th Street in Niles will be closed until Tuesday morning for water and fire damage cleanup.

Police said the arsonist was wearing a mask, brown pants, and a dark colored shirt.

Hundreds of customers showed up to Walmart to shop Sunday afternoon and were turned away.

Police describe the suspect from surveillance footage as a white male with a thin build.

The man was wearing a mask and fled in a dark-colored four door vehicle.

If you have any information call the Berrien County Sheriffs Department or Crime Stoppers.