No one to be fired after Melania Trump speech plagiarism episode 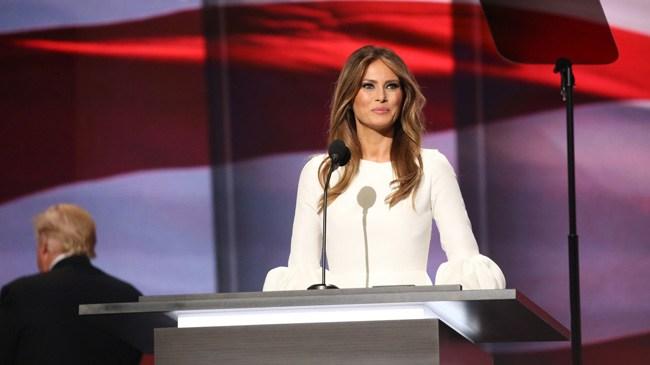 Trump's campaign hopes to simply move on without further addressing questions about the speech.

Aides to the presumptive Republican nominee are scrambling to move past the imbroglio after a passage in Melania Trump's speech Monday night, which headlined the Republican National Convention's opening night, closely mirrored a portion of Michelle Obama's address to the Democratic National Convention in 2008.

It's set off infighting and finger-pointing within Trump's campaign, and two sources told CNN that Donald Trump himself is furious about it.

Trump's aides chalked the controversy up to media bias and blamed Hillary Clinton's campaign -- even though the apparent plagiarism was discovered by an independent journalist and had gone viral before Clinton's allies and Democrats even weighed in.

In an interview with CNN's Chris Cuomo on "New Day," campaign chairman Paul Manafort denied the allegations of plagiarism.

"To think that she would do something like that knowing how scrutinized her speech was going to be last night is just really absurd," Manafort said.

Manafort said the words Melania used were not "cribbed" but are common words.

Sean Spicer, the Republican National Committee's chief strategist, invoked "My Little Pony" in defending the speech in an interview with CNN's Wolf Blitzer.

"Melania Trump said, 'the strength of your dreams and willingness to work for them.' Twilight Sparkle from 'My Little Pony' said, 'This is your dream. Anything you can do in your dreams, you can do now,' " Spicer said.

He also compared passages of Trump's speech with phrases from musicians John Legend and Kid Rock.

"I mean if we want to take a bunch of phrases and run them through a Google and say, 'Hey, who else has said them,' I can do that in five minutes," Spicer said. "And that's what this is."

However, Trump's campaign faced criticism even from allies, who largely blamed staffers -- not Melania Trump.

Former Trump campaign manager Corey Lewandowski said Tuesday that whoever is responsible for writing the should be fired.

"Whoever was the staff person who wrote this speech should be held accountable and should be fired," Lewandowski told CNN's John Berman and Kate Bolduan.

Lewandowski, who is a CNN contributor, was fired from the Trump campaign last month.

Republican National Committee Chairman Reince Priebus said at a Bloomberg Politics event Tuesday morning he'd "probably" fire whoever was responsible for including plagiarized quotes, though he added: "It all kinda depends on the circumstances and how these things are written."

The controversy quickly overshadowed the speech, which was to have been her introduction to voters. It focused on her immigration to the United States and her love for her husband.

The Trump campaign released a statement on the speech after the similarities were uncovered, but it did not mention the plagiarism charge.

"In writing her beautiful speech, Melania's team of writers took notes on her life's inspirations, and in some instances included fragments that reflected her own thinking. Melania's immigrant experience and love for America shone through in her speech, which made it such a success," according to Jason Miller, the senior communications adviser.

"I just don't see it," Christie told CNN's Jamie Gangel in an interview Tuesday, adding later, "If we're talking about 7% of a speech, that was really, universally considered to be a good performance by Melania. I know her. There's no way that Melania Trump was plagiarizing Michelle Obama's speech."

Who wrote the speech?

Side-by-side comparisons of the transcripts show the text in Trump's address following, nearly to the word, the would-be future first lady's own from the first night of the Democratic convention in Denver nearly eight years ago.

Sources familiar with the campaign's handling of Melania Trump's speech identify top Manafort deputy Rick Gates as the person inside the campaign who oversaw the entire speech process for Melania Trump.

Gates is denying he oversaw the process of putting together the speech.

When CNN's Jim Acosta asked Gates if he oversaw the Melania Trump speech process, he said "absolutely not."

Manafort, on CNN's "New Day," said the scrutiny over Melania Trump's speech was the work of Clinton's campaign.

"This is once again an example of when a woman threatens Hillary Clinton, she seeks out to demean her and take her down. It's not going to work," he said.

However, Trump's aides haven't pointed to any evidence of Democrats' involvement in fanning the controversy.

Clinton's campaign on Tuesday focused instead on bashing Republicans for other speeches Monday night, including the mother of a Benghazi attack victim saying she'd like to see Clinton imprisoned and the crowd chanting at another point, "Lock her up!" In a fundraising email to supporters, Clinton's campaign said "there's a difference between drawing a contrast and baselessly saying your opponent belongs in jail."

"As it relates to Mrs. Trump's speech, I'll let all of you weigh in on all of that and try to learn more about how exactly it was written," Earnest said. "What I can say that in 2008, when Mrs. Obama spoke, she received an enthusiastic reception and strong reviews because of her words, her life story, and the values that she and her husband deeply believe in and try to instill in their kids."

Earlier in the day, Melania Trump told NBC's Matt Lauer: "I read once over it, that's all, because I wrote it ... with (as) little help as possible."

"(To be honest), I was more offended by just about every other speech than Melania's plagiarized paragraphs," former Obama speechwriter Jon Favreau jokingly tweeted as the accusations went viral hours after Trump's address.

Journalist Jarrett Hill seems to have been one of the first to notice the similarities on Twitter.

He's a big fan of the Obamas, and told CNN over the phone that one particular line from Michelle Obama's 2008 speech really spoke to him: "To know that the only limit to the height of your achievements is the reach of your dreams and your willingness to work for them."

When he heard Melania Trump start saying "the only limit to your achievements," he knew something was wrong.

Hill said he then Googled Michelle Obama's speech and saw the similar lines.

"It was kind of a total recall moment," he said.

"Um. This is becoming a thing," he later tweeted.

Never gonna let you down?

In an even stranger twist, some on social media posited that Trump surreptitiously Rickrolled -- a common Internet meme involving singer Rick Astley -- everyone in the middle of her speech.

"He will never give up," she said of her husband. "And most importantly, he will never, ever let you down."

The chorus of the 80s classic sounds very similar: "Never gonna give you up/ Never gonna let you down/ Never gonna run around and desert you."

A bit of background -- Rickrolling is where you get someone to unwittingly click on a link to the video of the Astley song "Never Gonna Give You Up."

So, for example, if someone were to tell you to click here, saying it's another article about Melania Trump, and you click on that link, you would be taken to an Astley video and thus have been Rickrolled.