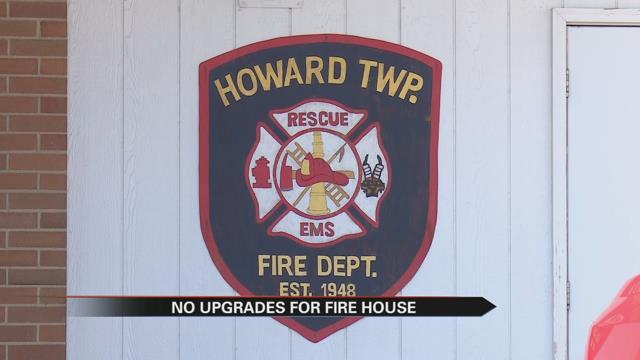 Howard Township voters said ‘no’ to a tax increase that would’ve funded construction of a new fire station and town hall the fire chief and town supervisor say is badly needed.

“We have to kind of downgrade our equipment to get it to go into our station,” Howard Twp. Fire Chief Ed Leneway said.

“It’s a very big impact cause, you know, only a quarter of our township is covered by hydrants,” Leneway said. “The rest of it we all haul; every bit of water in the township is hauled on them trucks.”

But even custom-ordered smaller fire trucks barely fit in the nearly 70-year-old firehouse.

The space is so small, the firefighters built a second building to store one of their trucks, and they purchased a cargo trailer to store other supplies.

“When this truck comes in from a fire, we have to reload hose back on this truck, and there’s no way you can get up on top to load it unless you’re outside,” Leneway said, pointing at the 2,500-gallon tanker.

Couple these problems with a sinking foundation, cracks in the floors and walls, and a leaky roof that loses shingles, and that’s why Leneway and Howard Township Supervisor Craig Bradfield were hoping voters would approve a tax increase to fund the construction of a new fire station and town hall.

“Unfortunately, people didn’t see that need,” Bradfield said. “But maybe, if we get a chance in the next couple of months, we can put together a plan and maybe send out a mailing and say, ok, these are what’s wrong with the fire station, this is why we wanted to have the building done.”

Leneway said his crews manage to deal with the poor conditions, but he said a new firehouse would mean new levels of protection for the community.

“They do what they can, but they can only go so far,” Leneway said of his firefighters. “Cause once that water quits coming out the end of that hose, you’re done until we get another truck here.”

Township officials are now exploring new ways to get the funding needed to replace the station and the town hall – which is nearly 90-years-old and has failed inspection for the last 15 years.

Bradfield said the longer these projects are delayed, the more expensive it will be for the community.