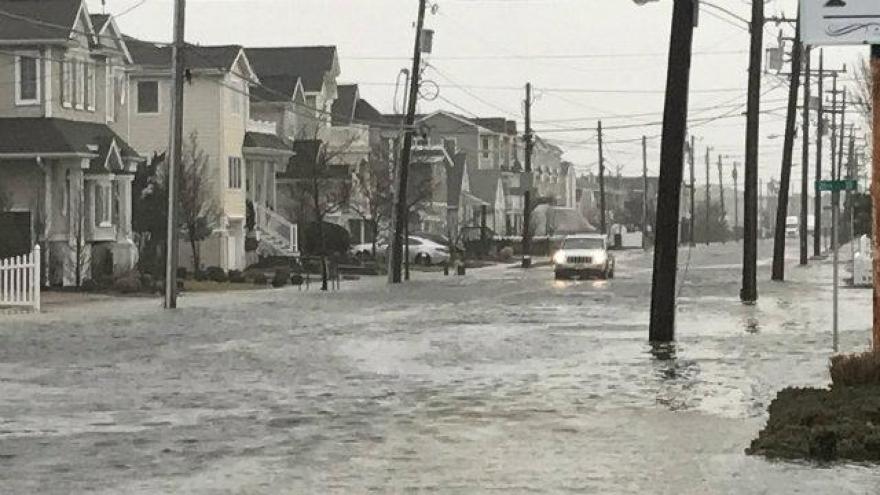 (CNN) -- A nor'easter whipped the Northeast on Tuesday with heavy winds and rain, causing street flooding in coastal areas and slowing commutes throughout the region.

The storm was created by the weather system that spawned deadly tornadoes in the Southeast over the weekend and then moved north. One death has been reported in the Northeast -- a 60-year-old man died after being struck by a car lot sign that was knocked down by wind Monday, Philadelphia police said.

Gusts of nearly 50 mph were reported Tuesday morning in Central Park in New York City and 60 mph gusts were recorded in the Hamptons on Long Island, CNN meteorologist Dave Hennen said. One weather station in east Boston -- where a cold rain fell -- reported a gust of 52 mph.

By Tuesday evening much of the precipitation had moved north of Boston, though much of western Massachusetts was under a freezing rain advisory.

The weather caused the cancellation of flights out of LaGuardia, Newark and JFK airports on Monday and there were more than 1,300 air travel delays and 250 cancellations Tuesday, according to FlightAware.com.

"A little rain you can deal with, but the wind is crazy," Josh Huber, who lives in Point Pleasant, New Jersey, told CNN affiliate WCBS. "It's hollering at my house."

The low pressure system was centered off the Jersey coast on Tuesday and produced snow in some cities in the Northeast, Hennen said. Snow was already falling in the interior sections of New England, upstate New York, Vermont and New Hampshire, he said. Six inches of snow is expected in Maine.

The National Weather Service said the bad weather should clear up Wednesday for New York and New Jersey.

That will make things easier for cleanup crews moving downed trees, debris and part of a roof blown off a condo building in Long Branch, New Jersey.

"We heard a huge bang in our parking lot," Rose Carich, a condo resident, told WCBS. "I ran outside to move my car but my back windshield was already smashed in."

Meanwhile, a storm system is moving from the Rocky Mountains and bringing widespread snow across Iowa, Minnesota, Nebraska and South Dakota, the National Weather Service said.

Winter storm warnings extend from Wyoming to Wisconsin and where 6 or more inches of snow is expected to fall, Hennen said.

The heaviest snow is expected just north of Omaha, Nebraska, and just south of Minneapolis, he said.

The weather service predicted 1 inch of snow in Minneapolis on Tuesday night and another inch Wednesday.

The Southeast is picking up the pieces after dozens of tornadoes tore through the region over the weekend, killing 20 people -- 15 in Georgia, four in Mississippi and one in Florida.

The latest death was reported from Lake City, Florida, where a woman died when a tree fell on her home Sunday, Columbia County EMA Director Shayne Morgan told CNN.

The tornadoes killed more people in one weekend than in all of last year, when 17 died across the country.

Overall, four weather-related deaths were also reported in California and one person died in Pennsylvania, increasing the nationwide total to 25 since the storms hit last weekend.

Fifty tornadoes struck between Louisiana through south Florida, from Thursday through Sunday, according to the National Weather Service estimates. The majority of them struck south Georgia.

"All you hear is people screaming, 'Help me, help me,'" said AJ Miley, a resident of the Sunshine Mobile Home Park near Adel, Georgia, according to CNN affiliate WSB-TV.

Devocheo Williams, also at the trailer park, said he saw people "tossed through the air," the Atlanta-based station reported.

"All I saw was a little girl flown up and thrown in a ditch. Three seconds later, the trailer got picked up off the ground and landed on top of the mother and son," Williams said.

At least six people were believed to be missing in Georgia, including a 2-year-old boy who was caught in the tornado in Dougherty County, officials said.

Chris Cohilas, the chairman of the Dougherty County Commission in southwestern Georgia, urged the Federal Emergency Management Agency to get "boots on the ground" to help the community. So far, he said, FEMA has not been responsive.

"To get caught up in the bureaucratic red tape at a time of this amount of human suffering is disgraceful," he said at a news conference on Monday.

In an email Monday, FEMA said the agency "is doing initial assessments of damages in Georgia today, including a flyover." FEMA will start federal and state preliminary damage assessments for individual and public assistance this week, the agency said.

Early estimates indicate losses in the tens of millions of dollars, according to the declaration.

Four deaths have been reported in California since the weekend: Two in San Diego County, one in Mendocino County and one in Los Angeles County. Two more people were missing off the coast of Pebble Beach, but the search was stopped because of deteriorating weather conditions, the US Coast Guard said Monday.