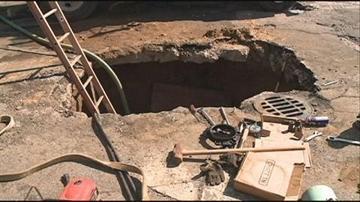 Katie Dankart was washing dishes when she noticed something was wrong. The water pressure was far too low. That’s when her boyfriend came into the house and told her about a problem in the front yard.

Outside, Dankart’s front lawn was quickly flooding. A contract crew working on a storm sewer project up the street had uncovered a leaking water main valve.

Since Dankart’s home sits at the bottom of the hill, the water was rushing in and there was nothing she could do but call North Liberty city officials for help.

Dankart wasn’t the only one with troubles, the city clerk, Vicki Kitchen, was dealing with situation of her own. Another project in the heart of town was also dealing with a leaking water main. In order to lower the water pressure to be able to fix the leak the city had to open up fire hydrants all over town.

The two leaks and the opening of the hydrant lines dramatically dropped the pressure, but it fell too far. Once the pressure dips below state mandated levels there is a possibility of bacteria slipping into the system.

North Liberty officials shut the town’s water off completely, and began to inform residents that a water boil would be put into effect. Kitchen and several volunteers spread out and covered the city, going door-to-door to ensure people knew not to use the water.

Town council president Tim Overberghe praised city clerk Vicki Kitchen for her ability to handle the situation quickly and smoothly. "Our clerk is fantastic when it comes to crisis management and what needs to be done," said Overberghe.

Meanwhile, crews were able to get both leaks fixed by 6:00 p.m. and water was flowing again. However, residents will have to continue to boil water until told otherwise.

The town will have to send water samples to an outside testing facility who will forward the results to the Indiana Department of Environmental Management (IDEM). When IDEM is satisfied the water is clean enough to use, they will allow the city to lift the boil order.