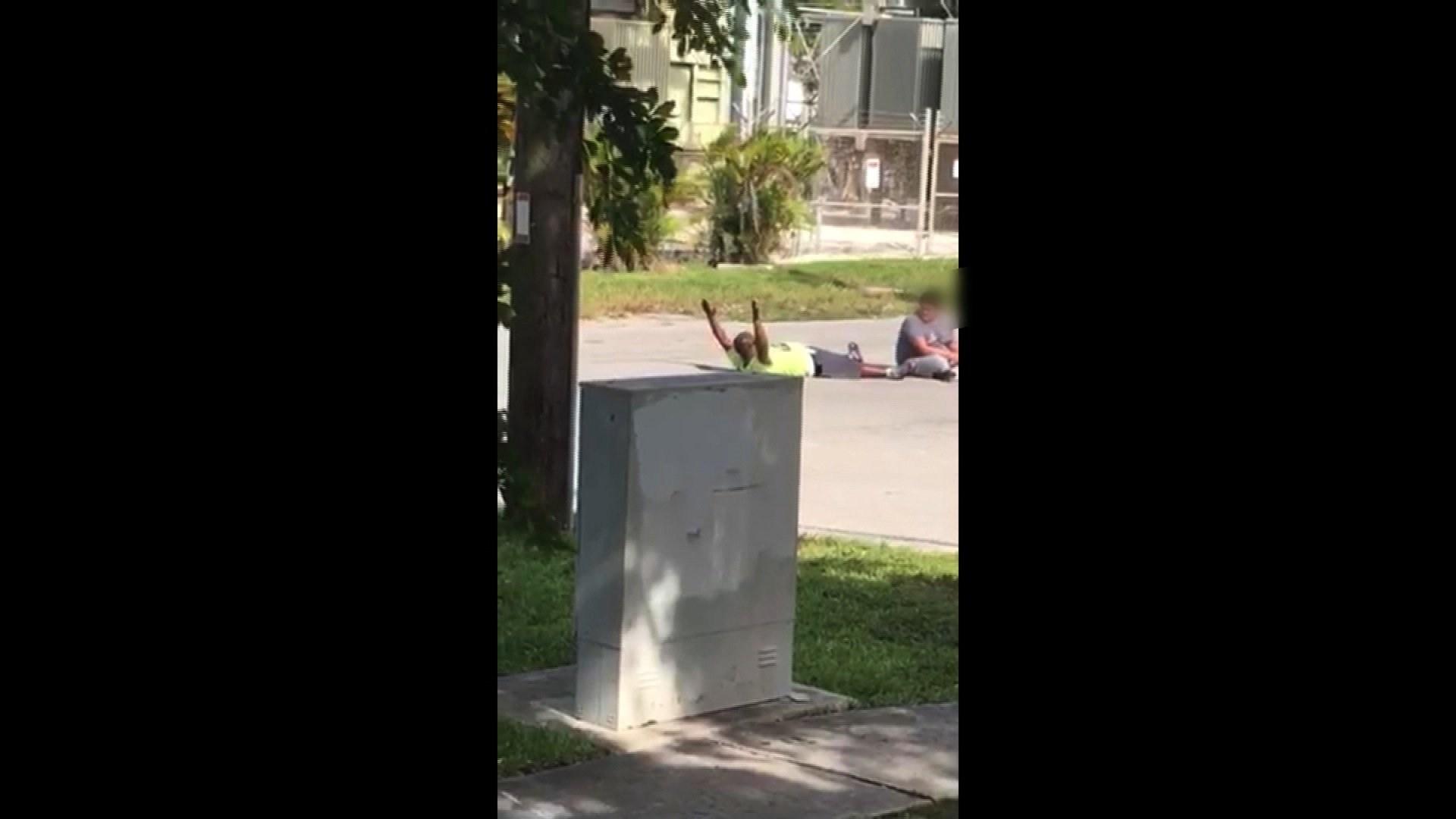 (CNN) - A video that shows an unarmed African-American man lying in the street with his arms in the air doesn't tell the whole story of what happened when North Miami police shot him earlier this week, a union official said.

An officer accidentally shot behavior therapist Charles Kinsey, according to John Rivera, president of the Dade County Police Benevolent Association. The officer, Rivera said, had been aiming for the patient beside Kinsey, whom he thought posed a danger.

But to Kinsey's boss, that explanation doesn't add up.

"The (union) is now trying to say they intended to shoot my client, and instead they shot my employee," Clint Bower told CNN's "New Day" on Friday. "To me, that's just outrageous."

Monday's shooting has sparked protests, a state investigation and questions over whether race played a role in the officer's response.

But there's another side of the story that hasn't gotten as much attention.

Kinsey is a highly trained behavior therapist who rushed into the street to protect a patient, his boss told "New Day."

"Mr. Kinsey is a hero today. He saved the life of that disabled individual," said Bower, who runs the center for the developmentally disabled where Kinsey has worked for more than a year.

"This individual he was caring for is a person with significant behavioral issues, and Charles was specifically chosen to work with this individual as his one-on-one staff, because he is that much of a skilled employee," Bower told CNN. "He has received extensive crisis intervention training. Unfortunately, our police department doesn't seem to have received that same training."

Kinsey is hospitalized with a gunshot wound to his right leg after two or three shots were fired, according to his attorney.

A cell phone video, released by attorney Hilton Napoleon II and recorded by a bystander, shows the scene before the shooting: A man sits cross-legged on the ground, holding an object in his hand. Kinsey lies on the street, holds his hands in the air and yells to police that the man beside him is holding a toy truck, not a weapon.

The video doesn't show what happened when the officer opened fire.

Kinsey told CNN affiliate WSVN-TV in Miami that after the shooting, he was flipped over and handcuffed. Another video released by his attorney shows Kinsey lying in the road, on his stomach and handcuffed. Both men are flat on the ground, with two officers standing near them. According to Napoleon, Kinsey was on the ground for 20 minutes before an ambulance arrived.

Authorities haven't released details about what happened after the officer opened fire, and the police union did not explain why Kinsey was handcuffed.

Rivera, the police union chief, offered an explanation for the shooting Thursday. The police officer opened fire because he thought the other man, whom authorities later learned has autism, was going to harm Kinsey.

"This wasn't a mistake in the sense that the officer shot the wrong guy or he thought that Kinsey was the bad guy," Rivera told reporters.

"The movement of the white individual made it look like he was going to discharge a firearm into Mr. Kinsey and the officer discharged trying to strike and stop the white man and unfortunately, he missed the white male and shot Mr. Kinsey by accident."

Rivera said that the video footage was "being portrayed poorly."

Video of the shooting itself hasn't surfaced, Napoleon said. He said the union's comments are "attempts to try to put a story together in an attempt to justify it."

"That was a man who was at work, who was caring for another individual on the ground. He is still concerned, if you listen to the video, about his client. He still ends up getting shot," Napoleon said. "I don't understand, just like the rest of America, how someone could possibly try to justify this."

Authorities haven't released the name of the officer who opened fire. In a fact sheet released via social media, police said the officer is a 30-year-old Hispanic male with four years on the job.

North Miami police have said officers responded to a 911 call about an armed man threatening to commit suicide, and opened fire after police attempted to negotiate.

"Mr. Kinsey did everything right, let's be real clear about that," Rivera said. He said that the police officer involved "wishes nothing but the best for Mr. Kinsey and the officer is praying for his speedy recovery as are we."

The unidentified officer, who has been placed on administrative leave, issued a statement in the form of a text message, which Rivera read to reporters.

"I took this job to save lives and help people," according to the officer's text statement. "I did what I had to do in a split second to accomplish that, and hate to hear others paint me as something I'm not."

Kinsey told WSVN he was stunned by the shooting, like when a mosquito bites unexpectedly.

North Miami police have said officers had "attempted to negotiate with the two men on the scene."

Kinsey told WSVN he tried to persuade police not to harm his patient. He asked his patient to be still and lie down.

"I was more worried about him than myself," Kinsey told WSVN.

The Florida Department of Law Enforcement is investigating the shooting.

Kinsey's shooting comes after a pair of officer-involved shootings led to the deaths of two men, Alton Sterling and Philando Castile, kicking off national unrest and putting the spotlight again on police use of force, particularly against black men.

Eight law enforcement officers have since been killed in separate incidents in Dallas and Baton Rouge, Louisiana, targeted by gunmen who claimed they were reacting in part to shootings such as those that led to the deaths of Sterling and Castile.

A U.S. congresswoman whose district includes North Miami told reporters she was shocked by Kinsey's shooting.

Wilson described the city as a "melting pot."

"We're not accustomed to this tension that is evolving because of this shooting," she said. "We have to follow up and see how we can break the tension and find solutions, because this cannot happen again."