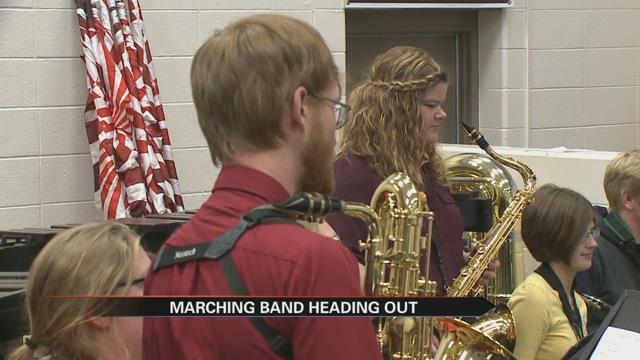 NorthWood High School’s marching band is on its way to two big cities. First stop is Philadelphia where they will be participating in a Thanksgiving Parade and from there a drive up to New York City for the annual Macy’s parade.

In class students wanted to play the songs they would be playing throughout the parade. Right before they left they were rushing packing up their things and getting settled for their road trip, but any will be taking this trip without their families.

“My mom was really supportive of me going and really wanted me to go and experience all that we are going to get to see,” said Kristen Hochstedler a band member.

“We do things as a whole and we grow as a family and as musician,” said Alex Brovont a senior on band.

Some of these NorthWood students have never traveled to big cities like New York, so this Thanksgiving they’re hoping to take it all in.

“We live in a small town, and its different to go out and see skyscrapers and enjoy the big town,” said Lee Dougherty another senior on band.

Even the Director of Bands, Eric Criss, said he’ll be experiencing something new. “Things have been panning out very smoothly and we’re very excited to try something different and go to a different location this time.”

The Northwood marching band travels every four years and for the past five they’ve been Indiana State Marching Band finalists.

“We feel privileged to be getting into that crowd of the perennial bands that qualify for that,” said Criss.

This year they were third in the state leaving Criss speechless. “Students tease me about getting emotional about it and I still do from time to time,” he said.

With daily class periods and hour practices twice a week, the day finally came where they loaded up two motor coaches and started heading east.

We know our music. We know our marching; we’ll be good out there,” said senior Linnea Bendes.

But being part of band isn’t just about music or playing an instrument.

“Sometimes we get pushed, beyond what our limits are and that helps us realize that we are capable of doing a lot more,” said senior Josefina Castillo.

The drive to Philly is about ten hours and as soon as they come back it’s pep band season time!

These band members have their holiday Christmas concert and basketball season to look forward to.