Not caught on tape: Police blamed for missed recording of shooting 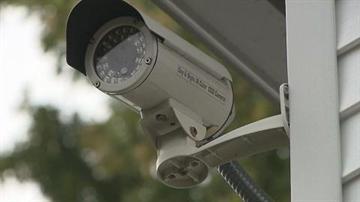 SOUTH BEND, Ind. – It was just before 10 p.m. Monday when a single bullet exploded through the sheetrock, plaster, curtains, and a sofa across the room in a home on Calvert Street on South Bend’s south side.

John Wise wasn’t home at the time, but his wife was sitting just a few feet away from where the round burst through the wall on the street side of the house. Had his Great Dane been sitting on the couch in its usual spot, the dog could have been killed.

According to a police report, the shooting happened at about 9:41 p.m. and an officer was dispatched about ten minutes later. According to neighbors, just one police car arrived at the home.

According to the homeowners, the police officer gathered information for a few minutes then went outside and left a short time after that. The bullet itself remains lodged in the wall behind their sofa.

Police officers tell me there is little  to be learned from what is surely a twisted hunk of metal; it is the casing that holds the key. Markings on a bullet casing are just like fingerprints, and many can be matched to the gun used to fire them.

John Wise says, he doesn’t believe the officer contacted any neighbors to take statements from them, and his neighbor across the street Brian Yost says, the officer left within minutes of exiting the home.

The police log of dispatch calls clearly states shots were fired into a home, yet it appears just one unit responded. It also categorizes the incident as a vandalism case, something that is standard when there are no injuries related to a shooting like this one was.

Wise had hoped to provide the officer with a better description of the shooter and which direction they left the scene in. Six months ago he could have.

Wise has a high quality day and night video camera surveillance system installed at his home. It was in place and recording on April 18, 2011 when footage shows a man walking into Yost’s enclosed porch area.

Several minutes of recorded footage pass, before a police car drives past the home. Within moments, a figure is seen exiting from behind the home, and shortly after that a man walks back out the way he entered the porch.

Later that day Wise’s neighbor Yost returned home to find it had been burglarized and several of his guns had been stolen. Wise offered to let the police borrow the digital video recorder (DVR) the footage was being piped into, to use for evidence.

Wise says, the detectives told him they would make a copy of the footage and return his machine. When it wasn’t returned right away, Wise says he contacted the St. Joseph County Prosecutor’s Office. He says, they told him they still needed the machine.

A few days after the burglary, Yost says he identified the suspect and police arrested a man. But in July the case was dismissed due to insufficient evidence. Yost and Wise say they were never told about this.

In the meantime, Wise’s DVR has still not been returned and Monday night the shooting could not be recorded because of that.

Tuesday, both neighbors were ready to pack up their homes and look for a new place to live. Wise says, it has been nothing but trouble and crime since he moved into the home nearly 5 years ago. His home has been burglarized, his truck set on fire, ad his property spray painted with graffiti.

But it was Monday night’s shooting that is the final straw. Like his neighbor, Brian Yost is ready to move out as well.

The two neighbors have been watching over the neighborhood for several years now. Frequently calling police when they see drug deals going down out in the open. They claim credit for running five crack houses out of the neighborhood simply by reporting illegal activity.

The neighbors support the police effort by flying flags memorializing fallen police officer’s on flag poles in their yards. And they say it is distressing when they feel the police could have taken another approach to what happened Monday night.

Instead of treating the shooting like a misdemeanor vandalism call, they expect the police to respond to the fact that a firearm was discharged inside city limits, to hunt down the person responsible, and to find out if they are even licensed to carry the weapon.

Now, Wise and Yost just want answers to two questions. Why were they not told of the dismissal and where is Wise’s property? “They were supposed to record the information off of that DVR and return it and; for them not to even prosecute the gentleman and still have possession of my DVR, it’s.. I don’t even have words for it,” said Wise.

His neighbor Yost had plenty of words he wanted to share with police Tuesday night. “Number one you dismissed the case, so why do you still have [the machine]? You should have personally drove out here and delivered it to him, and then you could have walked across the street and looked me and said sorry about your luck,” said Yost.

Yost has vowed to protect his home and possessions by shooting to kill anyone who enters his home illegally. Wise has also armed his family, and continues to take steps to secure his property with extra outdoor lighting and cameras. Now he just needs his recorder back so they can operate to their full potential.