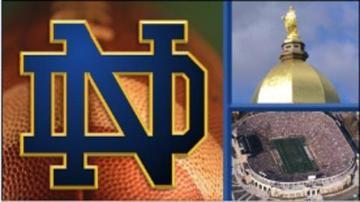 NOTRE DAME, Ind. – The University of Notre Dame has accepted an invitation to become a member of the Atlantic Coast Conference in all sports, with the exception of football and hockey.

Notre Dame Athletic Director Jack Swarbrick, said the university will work with the Big East and ACC on a timetable to transfer athletic membership.

“We have monitored the changing conference landscape for many months and have concluded that moving to the ACC is the best course of action for us,” said Swarbrick. “This will enable us to maintain our historic independence in football, join in the ACC’s non-BCS bowl package, and provide a new and extremely competitive home for our other sports.

Along with having a partnership the ACC, Notre Dame has agreed to annually play five ACC opponents in football and each conference member at least once every three years. The Notre Dame hockey team is also still scheduled to move to the Hockey East, after a final season in 2012-13.

“This approach allows us to help promote ACC football while maintaining our traditional rivalries and a national schedule,” said Swarbrick.

Notre Dame's president, Rev. John I. Jenkins, C.S.C., said the ACC offers other benefits to Notre Dame, like having some of the most highly respected universities in the county.

"With a mix of institutions, many of which are also private, similar to Notre Dame in size and committed to excellence in research and undergraduate education,” said Father Jenkins. “The ACC is an exceptionally good fit for us academically, as well as athletically. It is our hope that, over time, we will be able to explore the possibility of academic collaboration as well as athletic competition with these outstanding universities."

Most Notre Dame athletics programs have been members of the Big East Conference since 1995 after previously competing in the Midwestern Collegiate Conference, North Star Conference and as independents.