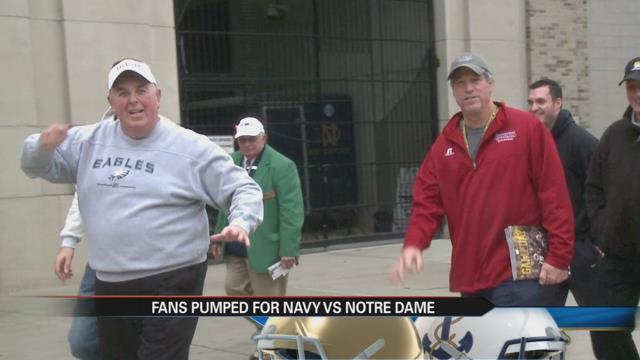 Notre Dame and Navy fans say they have nothing but warm feelings for their rivalry game. That's because of the history and respect both programs have for one another. It's the longest intersectional rivalry in college football.

"Nothing like watching our boys who serve for us," said Irish fan Bill Hervy out of Staten Island, New York.

For some Navy fans, like California's Archie Aragon, it's about family.

"My wife is a Notre dame fan," said Aragon. "My dad's retired navy. And I got to root for the guy."

Others say they've found a separate football family with the midshipmen.

"We love the academy," said Jim Brass out of Buffalo, New York. "We love the navy atmosphere. The friends we've met at the games."

Irish fans say this rivalry game allows them to honor young men with a different mission than hoisting a trophy.

"They know that they aren't playing in the pros," said Patrick Carey out of Williamsburg, Pennsylvania. "I think they take their warrior mentality onto the field. I'm excited about the pageantry of being here and watching Navy also."

"I'm very partial to the military," said Leo Carey. "I was a Korean War veteran. Those kids are special. They give their life up for the country."