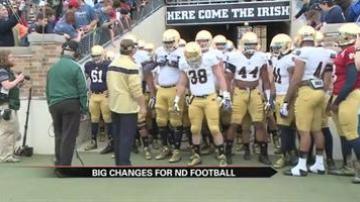 NOTRE DAME, Ind.-- Notre Dame Athletic Director Jack Swarbrick officially announced that the university will install a FieldTurf surface following commencement in May. The artificial turf will be in place for the first home game of the 2014 season.

Time for a change. Synthetic field turf will be in place at Notre Dame Stadium by 2014, and Head Coach Brian Kelly says the turf will do more than just benefit the stadium's look and player safety.

“I think you look at the conditions of the field, today, going out there and it’s really about getting a surface where there’s some consistency week in and week out for our players,” Kelly said.

And that consistency is something players say they look forward to.

Despite all of the excitement surrounding the turf announcement, the Irish say their top priority was learning from Saturday's final spring scrimmage. For fomer running back Amir Carlisle, that meant getting more comfortable as a wide receiver.

“I think we were consistent as a receiver corps obviously, but in terms of our route running and catching the ball but always a learning experience and there’s always room to improve,” Carlisle said.

And for others, like defensive lineman Sheldon Day, Saturday was a chance to showcase a larger leadership role to faithful Irish football fans.

“It’s a great opportunity I’m blessed with. Playing after Lewis and Tuitt and it’s just a great thing to step up to and kind of step up to the plate and hopefully overcome that plate,” Day said.

Not only was Saturday the last time the Irish played on natural grass at Notre Dame Stadium, it was also the last time we'll see them suited up in their Adidas gear. This fall they will take the field in new Under Armour uniforms.