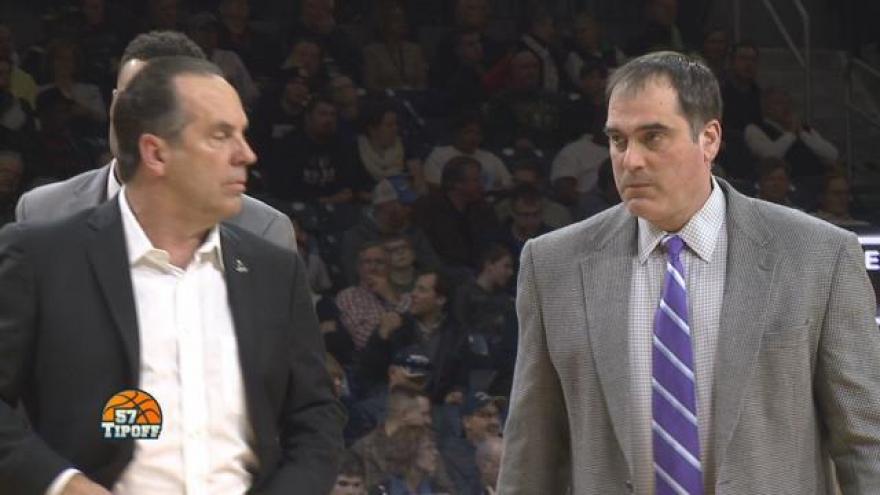 Notre Dame Head Coach Mike Brey has had many assistants come and go during his 17 years as the head man of the Irish. But one man has stayed with him through it all, Rod Balanis.

"Was always impressed with him," Brey said of Balanis.

Brey and Balanis friendship goes back close to thirty years. They met when Balanis was a sophomore at DeMatha High School, and Brey was a young assistant coach under legendary Head Coach Morgan Wooten.

Balanis, the son of a coach, says that's where the love of basketball began, and star on the rise, he set his eyes on the future.

"At that age when you're coming from Dematha High school, you're going to go play in the ACC, man maybe I could be a pro someday but it was kind of a reality check," Balanis said.

However, just before heading to Georgia Tech, Balanis was involved in a car accident that fractured his femur and broke his arm to the point where they had to put a metal plate in that he still has in there today. His dreams and goals were deferred.

"It kind of got my wheels turning in the back of my head like you know if I don't come back or I'm not the same which ended up being what happened when I was at Georgia Tech, you know the game has been really good to you, it's time to give back to the game," Balanis said.

After graduating from Georgia Tech, and spending a couple of years as an assistant coach at Colgate, Balanis received a call from his old coach.

"I don't have an older brother so he's probably the closest thing I have to an older brother. I don't think he's changed at all, he's still the same guy that was teaching that remedial history at Dematha and Coach Wooten's assistant, he hasn't changed," Balanis said.

And Balanis hasn't left since the day he was hired.

"I work at a great place and I work for a great guy!" Balanis said.

The same can be said about Balanis.

"He's my confidant! I sit with him in the locker room before the game and I'm a nervous wreck and he's a guy that keeps me calm. He's a glass half full guy. I could be really down, he's a guy that always picks me up!" Brey said.

Balanis though says that it's Brey who continues to be the one that allows him to grow not only as a coach but also as a person.

"One thing he always says, just spend 10 minutes with one of our guys in your office away from the court, that's sometimes so much more valuable than working on their left hand or working on some free throws," Balanis said.

17 seasons, one constant face, but even Brey knows that face may soon depart.

"He deserves to be a head coach and I think he will be one day," Brey said.

Balanis told me he does indeed want to be a head coach one day and that could happen as soon as this spring.