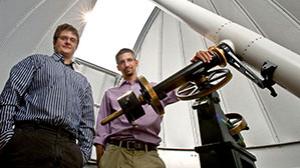 University of Notre Dame astrophysicist Nicola Lehner led a team of scientists who used the Hubble Space Telescope to identify an immense halo of gas surrounding the Andromeda Galaxy, according to a press release from the university.

“Halos are the gaseous atmospheres of galaxies,” said Lehner. “The properties of these gaseous halos control the rate at which stars form in galaxies.”

The Andromeda Galaxy contains one trillion stars and is 2.5 million light years away.

The halo is 100 times the diameter of the moon and is invisible, according to the university release.

The team's findings were published in The Astrophysics Journal. It was written by Lehner, co-investigator J. Christopher Howk, associate professor of physics at Notre Dame and Bart Wakker from the University of Wisconsin Madison.