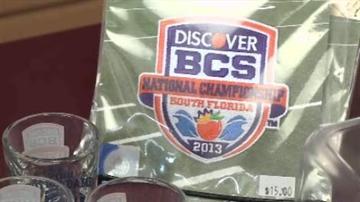 SOUTH BEND, Ind. -- Notre Dame fans are counting down to more than just 2013. The excitement is building for the national championship game. If you haven’t picked up your BCS merchandise, there’s still plenty of official memorabilia in stock at the BCS licensed store in South Bend.

When it became clear Notre Dame would be playing for a national title, Don Mensen knew where he would be spending his holidays.

"I could have worked the Fiesta Bowl, or the Orange Bowl, or the Rose Bowl; Notre Dame was the no-brainer for me. This is where I wanted to be,” said Don Mensen, Manager of the Notre Dame Store on Ireland Road.

Mensen works for a company that travels the country bringing sports memorabilia often only found on location at major events to hometown fans.

"Not everybody can go to the game. So we're here to fill that void with all kinds of souvenirs,” said Mensen.

"It opened with a bang, in all honesty; and then the Christmas just carried us right through,” said Mensen.

Mensen says one of the biggest differences between the imitation memorabilia and the merchandise Mensen sells is in the quality and who they get their products from, like Adidas, Blue 84, and Jansport.

"Everything in the store has a hologram. Everything has been approved by the BCS Bowl, by Notre Dame, by Alabama, a lot of safeguards. And then also, I'm not going to be gone the day after the game,” said Mensen.

In fact, Mensen's boss is mulling over the idea of opening a permanent store on the south side.

Mensen says it's obvious one is needed on that end of town and the customer response at this location has been impressive.

In the meantime, Mensen's short term plans are bold.