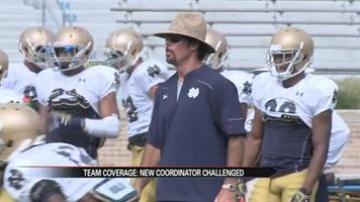 NOTRE DAME, Ind.-- While four Notre Dame Football players are being investigated for academic fraud, new Defensive Coordinator Brian VanGorder is working to adapt without them. VanGorder said, “It’s no different to me than an injury, that’s just part of our game, there’s really no time to give it the ‘ooo shucks' or whatever it might be, next player in, and we’ve gotta roll!” This past Friday news broke that 3 of his defensive players are involved in a cheating investigation. Cornerback KeiVarae Russell, defensive lineman Ishaq Williams, and linebacker Kendall Moore will not be able to practice or play in games until officials conclude the investigation. VanGorder said, “The task ahead for us is huge and we are all in it together.” VanGorder is not only looking at possibly losing three players but he is also teaching his squad a new defensive style. He's moving the team from a 3-4 formation to a 4-3 which is a big transition for everyone. “We’ve got some guys who are building their game to be dependable and hold up consistently, some of those guys in our future are going to be high production.” One of the players he's talking about is inside linebacker Jaylon Smith. Smith recently told Sports Illustrated that he wants to be better than Manti Te'o and the coaching staff is pushing him to step up as a sophomore leader. Jaylon Smith said he likes VanGorder's aggressive coaching tactics, which is one reason they probably get along so well. Jaylon Smith said, “He’s a man of truth, he always says you get what you earn, so work hard work, it’s really just how he motivates us, giving it to us real and understanding that it’s going to be hard but you have to work for it if you want to be successful so the speed of the leader is the speed of the pack, so it’s something that coach vangorder has brought.” So far the University of Notre Dame has not set a date for when the academic fraud investigation will be completed.