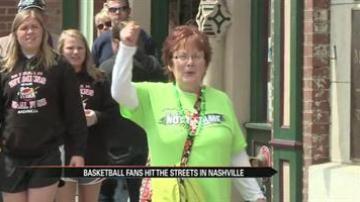 "I think the whole country has been waiting for this game," said Irish fan Chris Rowe.

Tuesday afternoon, the Nashville sky was clear except for the storm brewing between UConn and Notre Dame fans.

"You say it's a hatred? We don't like then and they don't like us," said UConn fan Rocky Anderson.

UConn fans are already on a high after their men's team won the NCAA National Championship in Dallas Monday night.

While UConn fans remain confident, the Fighting Irish have their eyes set on an undefeated season.

"It's just so exciting it's like pinch me I'm here," said Rowe.