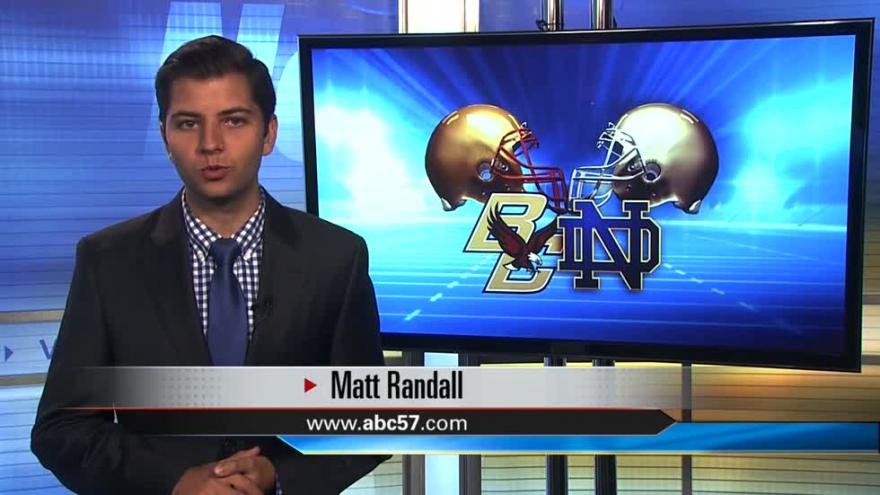 Notre Dame football erased nearly all memories of the heartache suffered against Georgia last weekend by traveling to Chesnut Hill, Massachusetts and turning in an impressive 49-20 win over Boston College.

Saturday was the first road test of the year for Notre Dame, but that test proved to be handled following a close first half.

All told, the Irish ran for more than 500 yards, including both Brandon Wimbush and Josh Adams eclipsing the 200-yard mark. Despite another challenging day in the passing game, Wimbush rushed for four touchdowns to set a new Notre Dame record for quarterbacks.

On the other side of the ball, Shaun Crawford stood out for the Irish defense. The defensive back totaled two tackles, two interceptions, and a fumble recovery.

While the Irish were busy getting back to their winning ways, their fans packed local restaurants and bars to watch it happen.

"It's just as great to have an away game," said O'Rourke's Public House manager Chris Neff. "We have the die-hard fans, who can't make it out there, still coming in and really just enjoying themselves."

O'Rourke's was one of several bars in South Bend full of Notre Dame fans, who just wanted a piece of the gameday excitement.

"We wanted to come over to South Bend to watch it," said Niles resident Al Casperson. "Kind of absorb some of the atmosphere and what's going on. It's just a little different way of doing it. Students are here, other people are here from the area that can't go to the game just like us."

Despite the Irish playing away from home for the first time this season, the atmosphere in South Bend was still celebratory because of an Irish win.

"We try to make everyone feel at home when they're here," said Neff. "Even when [Notre Dame isn't] here, it's like you're right there with them."

Those fans might have a better chance of making it to a road game next weekend with Notre Dame, now 2-1 on the year, will be taking on rival Michigan State in East Lansing.