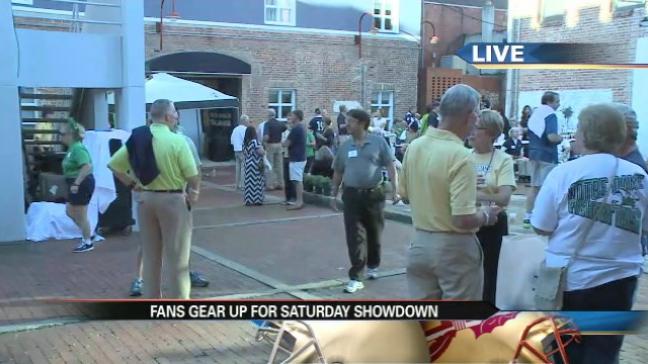 Notre Dame's football players are scheduled to land Friday night for Saturday's game against Florida State. Even though the team hasn't arrived yet, fans are already getting pumped for the match up.

The Irish haven't been cutting themselves any slack in practice this week as they prepare for the Florida State Seminoles.

Head Coach Brian Kelly said there were lots of mistakes to fix after last week's game against North Carolina.

Saturday's game will be the first road game for Notre Dame and the first time they've played on real grass all season.

The Irish have been practicing on grass this week--but that's not the only thing they're doing to get ready for the number two ranked Seminoles.

"Tried to simulate as much as we could with crowd noise. Certainly don't want to hear that war chant anymore, we played it enough this week, hopefully we won't hear it as much as we heard it this week," said Coach Kelly.

That war chant makes Florida State one of the most intimidating places to play in the country.