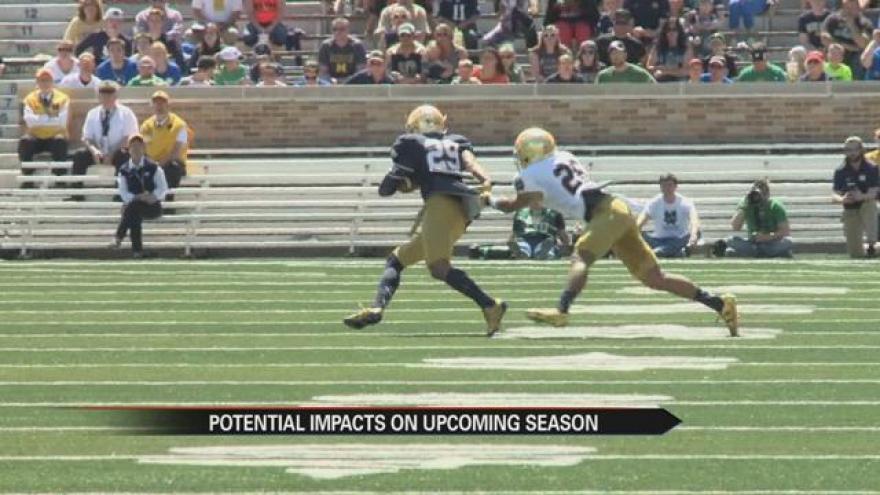 The arrest of six Notre Dame football players shows a ‘leadership void’ in the team, according to one Notre Dame sports writer. Fans say they’re disappointed in the players’ actions.

One year after the academic fraud scandal involving five Notre Dame football players, a dark cloud is looming over the team yet again.

“I can’t say I’m surprised these incidents happen, but some of them are starters, some of them are just freshmen coming in, and it’s just like to get into incidents with marijuana or resisting police officers, really it’s just kind of disappointing from that perspective,” said David Ledwidge, a Notre Dame fan.

“It’s definitely disappointing. You’d hope, like as a fellow student and fan of the Notre Dame football team, you’d hope they’d hold themselves to a higher standard, but in reality they’re all people, and everyone makes mistakes given the chance and opportunity,” said Notre Dame student Matthew Lillie.

“As far as Notre Dame, will they make it indefinite suspension? I would expect that to be certainly the case of the five players arrested in Fulton County,” said Irish Illustrated editor Pete Sampson.

Devin Butler was also arrested in South Bend over the weekend in a separate incident.

“You lose a lot of depth. K.J. Stepherson was a promising wide receiver, but probably your fourth or fifth wide out. Ta’Von Coney, a linebacker, probably your fourth linebacker, so you’re losing a lot of depth. Assuming they don’t have another injury, another suspension the entire season, which is a lot to ask in college football today, I think they could still be okay, but certainly it really hurts them in depth in some positions that really don’t have a lot of it to begin with,” said Sampson.

Besides how their loss would affect the team, Notre Dame fans seem to agree that these players’ actions do not reflect the entire university.

“This is not reflective of the University of Notre Dame standards or expectations, but I think it might be reflective of our society, and I only hope that Notre Dame will deal with this fairly and justly, however this turns out to be that they don’t turn a blind eye to something that should be addressed,” said Monica Skubal.

Sampson thinks the incident is reflective a bigger problem within the team.

“This is proof that they have a leadership vacuum this year. Especially with a senior like Max Redfield involved in this, I think it speaks to a leadership void that’s on the roster right now. Can they foster that and pull it together in the next four months, we’ll see, but I do think it suggests some of the concerns Brian Kelly had over the summer,” Sampson said.

This is what Coach Brian Kelly said during a press conference on August 5th:

“A lot of things that you have to work on are leadership, putting your guys in a position to succeed, and letting them grow and mature, and a lot of the things happen without coaches around.”

With or without leadership, fans are hopeful that the team will pull together and ride out the storm.