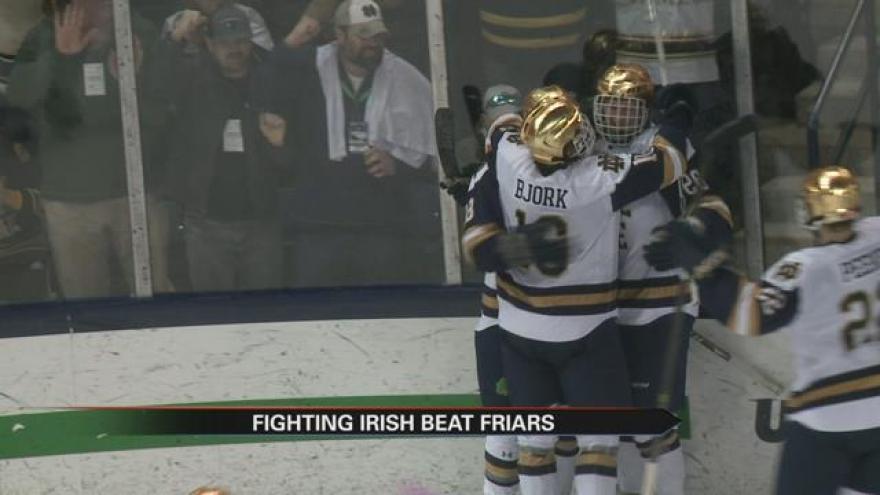 The Notre Dame Hockey team received a big blow today with one of its best players departing for the NHL.

"This was a difficult decision because Notre Dame is such a special place," Bjork said in a statement released by the university.

"I am ready for the next step in my hockey career and am excited for the opportunity to join the Boston Bruins organization. It is also important to me, my family, and my Notre Dame coaches that I finish earning my degree from the University so I will continue to work towards that goal as well."

"We are excited Anders is getting the opportunity to realize his dream of playing in the National Hockey League," Notre Dame head coach Jeff Jackson said. "He has promised to complete his degree at Notre Dame, which has been another dream of his. Anders is a great young man who has worked very hard to make himself into a great hockey player. I am proud of him and happy for him."

Bjork posted a career-high 52 points on 21 goals and 31 assists as a junior while leading the Irish to the 2017 Frozen Four. He also became the 3rd player in program history to be a Top-10 finalist for the Hobey Baker Award.

Bjork skated in 115 career games for the Irish, scoring 40 goals and adding 69 assists for 109 points, which ranks tied for 42nd on Notre Dame's career points list.

Bjork also represented the United States in international play on four separate occasions. Most recently, Bjork was selected to play with Team USA at the 2017 IIHF Men's World Championships, alongside Notre Dame teammate Cal Petersen and former Notre Dame captain Anders Lee. At the Under-20 World Junior Championships in 2016, Bjork skated in seven games, posting three goals with a plus-five rating, en route to earning a bronze medal. He also played for the United States in the Under-18 World Junior Championships in 2014 and the Under-17 World Hockey Challenge in 2013, where he won a bronze medal with Team USA.

Bjork was drafted by the Boston Bruins in the fifth round (146th overall) of the 2014 NHL Entry Draft.