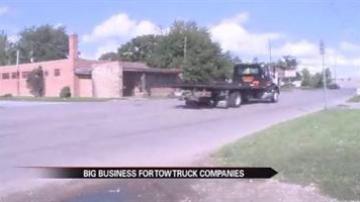 SOUTH BEND, Ind. --  Traffic was out of control today for the Notre Dame vs. Purdue game and parking was not any better, which means tow-truck drivers were extra busy today getting keys out of locked cars, hauling away wrecked vehicles and just trying to make their way through traffic.

"The scene can be hectic because we are trying to get to the scene of the accident and everyone else is trying to get away", said tow-truck driver Jason Kring.

He says sometimes the calls are as simple as locked keys in a car.

"I don't want to pick on the ladies..but they will throw their purse in the car because they dont want to carry their purse but they forget to grab their car keys out of their purse," said Kring.

Bumper to bumper traffic is busiest post game time, which Kring says can actually be the most dangerous, especially for tow truck

"After the games it tends to be busier because people have been drinking they have been having a good time," said Kring.

"People just don't move over and slow down for us..they don't realize that we are emergency response vehicles just like the fireman and police officers," said Kring.

So next time you see a tow-truck driver rushing to aid someone with car problems, Kring asks for people to consider not only the other driver's safety but his as well.

"When people do see us working on the side of the road..whether it be a traffic accident..changing a tire or helping someone who is locked out of their car please move over and slow down for us too..the life you save could very well be my own"

Kring says the reason he is in such a rush is that he is required by the city to be at the scene of an accident within twenty minutes.