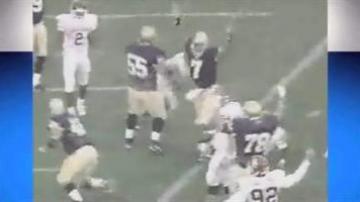 SOUTH BEND, Ind. -- If statistics were included in victories, then Saturday's game against the Oklahoma Sooners falls in favor of the Irish.

The Irish have a commanding lead on the series 8-1.

It has been 13 years that the two teams have played each other. In that game, the Irish came from behind to march onto victory.

The game in Norman, Okla. marks the tenth time the two teams have faced off. And it is the first since 1966 that the two have played in Norman.

In 1966, Beatlesmania still gripped the nation, Lyndon Baines Johnson was president and the Irish were well on their way to the National Championship. The Irish came away with the win 38-0.

The only time Notre Dame lost to the Sooners was on October 27, 1956. The Sooners went on to win the national championship.