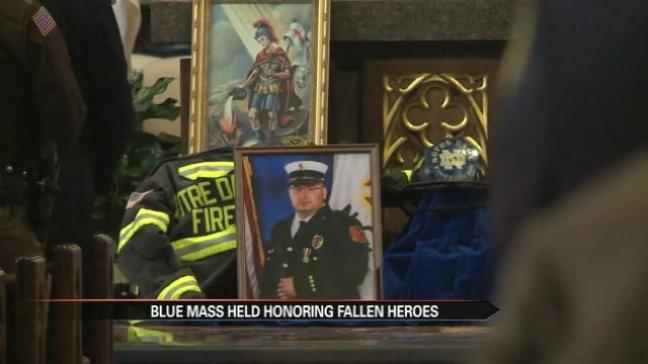 For several years, Notre Dame has held a Blue Mass at the Basilica of the Sacred Heart. It began after September 11th to pay tribute to first responders.

“Assistant Chief Middlebrook made the ultimate sacrifice in the service of his community. He was willing to give his all in the protection of others," said Phillip Johnson, Chief of Police for the University of Notre Dame.

Father Peter Rocca prays no one else suffers the same loss.

“One hopes that one never has to make that ultimate sacrifice but they are willing to do whatever it takes to keep us safe," said Father Rocca.

Mass attendees looked at Middlebrook's picture at the altar to remember everyone who puts their lives on the line every day.

“Everyday they don't know what's going to happen when that tone goes off," said Lora Lex. “They don't get the attention they deserve on an everyday basis and they're there every day though. Right now, if you call 911. They would be there."

Father Rocca said spending an hour once a year at church is the least anyone can do.